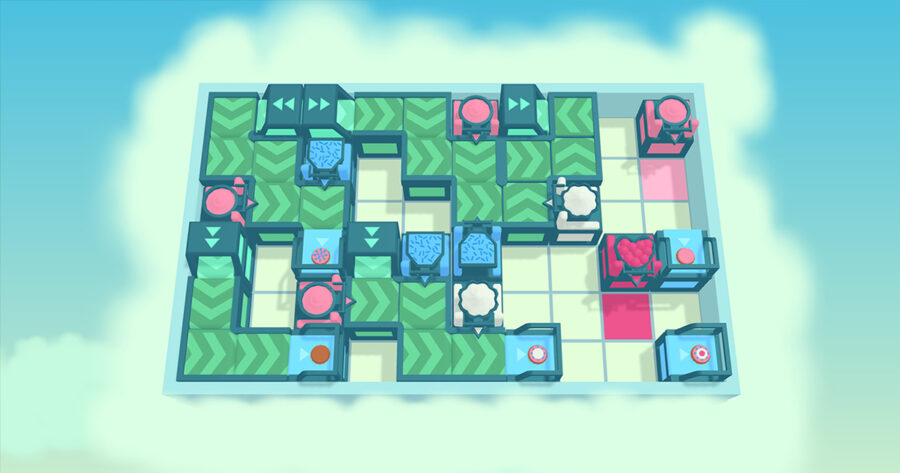 Let’s do some video game word association. I’m going to say a word, and you’re going to tell me what 2022 video game first comes to mind when I do. Ready?

What was your first thought? Perhaps it was Drive because that’s the name of this website and you’re not very good at understanding prompts. Maybe it was Sifu, the ultra-punishing kung-fu action game where you age every time you die. Or, more likely, your brain went to Elden Ring (despite the fact that we’ve already established it is easy, actually).

Wrong on all accounts, you filthy casual. When I say “hard,” your brain should go to one place first: this cozy, twee-ass puzzle game about running a donut factory.

Freshly Frosted quietly launched back in June and it’s been steadily gaining critical acclaim since then. At the time of writing, it’s one of the best reviewed games of 2022 according to Opencritic, further overshadowing Horizon Forbidden West. It’s easy to see why. The charming puzzle game has players building conveyor belts in order to assemble donuts in the right order and deliver them to customers. It’s a cute premise – and one that has ruined my life.

Don’t be fooled by its gentle pastels and soothing narrator: Freshly Frosted contains puzzles that will shatter your psyche. The game starts simple enough. You’ll start by building straightforward “point A to point B” conveyor belts that loop around a small grid. As with any puzzle game, slowly starts popping in complications one at a time. Soon you’ll need to assemble more complex donuts. Then you’ll need to make two conveyor belts instead of one. Then each will need to deliver a different type of donut. Then you need to use path splitters to turn one conveyor belt into five different ones that all need to deliver different donuts to different endpoints, all while snaking in and out of one another – and also accounting for machines that push your donut forward to another belt if they have a specific topping layout. And that’s before getting to cloning machines and donut mergers.

It’s a good time to note that this game is developed by “The Quantum Astrophysicists Guild.”

While most of the game’s 144 puzzles are easy (and delightful) to figure out, some of its tougher puzzles have turned my brain into jelly. I’ve spent entire 40 minute commutes staring at the screen dumbfounded as I try to solve a single puzzle. When I sleep, I see donuts. The conveyor belts taunt me. If you thought Malenia was hard, just wait until you’re asked to deliver six donuts to the same counter. No Mimic Tear that’s going to do it for you, coward.

When we talk about “hard” games, it’s rare that puzzle games like this really enter the conversation. That discourse is always focused on skill-heavy action games that test players’ speed and reflexes. But it’s time to finally acknowledge that puzzle games are the one-true hardcore gamer genre. In Elden Ring, there’s always some strategy you can find to cut down a boss in seconds. In Freshly Frosted, there are no cheeses – it would be fucked up to put cheese on a donut. You need to rely on the power of your big brain to solve complicated puzzles. You have no choice but to get good … at thinking (and let’s face it, that’s hard for a lot of us).

I’m really enjoying my time with Freshly Frosted so far, despite the sleepless nights a few of its puzzles have caused me. It’s a relaxing puzzle game filled with soothing sounds and cute visuals. Most of its puzzles are “not too easy, not to hard,” but it offers some strong challenges too. But what I especially love about it is that I can use it as a secret weapon. The next time you see a Pro Gamer condescend about how wholesome games aren’t “REAL GAMES,” ask them to solve one of Freshly Frosted’s hardest puzzles. It’ll make them reassess their entire personality.