New Sesame Street Episode Brought to You by the Letters ACAB 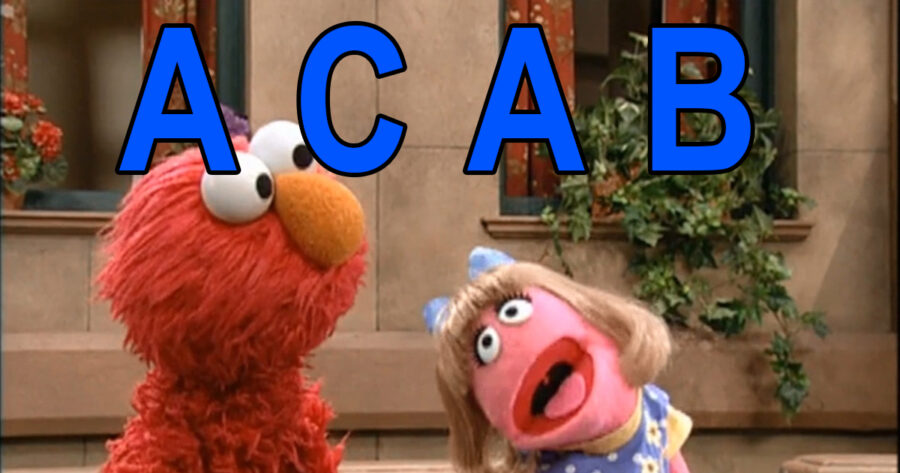 NEW YORK — Breaking tradition with the usual format of having episodes sponsored by single letters, a bruised, exhausted-looking Big Bird announced to viewers that week’s episode of Sesame Street was “brought to you by the letters ‘ACAB.’”

“It’s time for the letter of the day! But today, we have a special treat, because there are actually four letters of the day today,” said Big Bird, who had been confronted by police officers on the corner of Sesame Street earlier in the episode for sleeping outside, despite trying to explain that his large nest was actually zoned as a residence and that he had proper documentation. “The first letter of the day is ‘A’, and it’s actually the third letter, too! Let’s list some words that start with A: words like accost, assault, arrest, and abuse, as in abuse of power, which the police on Sesame Street and all throughout our country are often guilty of!”

“That’s right, Big Bird,” agreed Elmo, who’s father Louie had been the target of a stop-and-frisk procedure during the episode’s second act. “Elmo’s daddy was stopped for a search while walking down the street with Elmo just because they thought he matched the description of a suspect in the area. The description was for a purple monster wearing a Hawaiian shirt, not a red monster wearing a tracksuit jacket. That’s why the second letter of the day is ‘C’, like the quotas that the police care more about than daddy’s rights!”

“Oh, actually, Elmo, ‘quota’ starts with a Q, not a C,” added Big Bird, still nursing his wounds from the earlier police interaction. “A ‘quota’ is a numerical milestone that officers must meet over a period of time. Officers have quotas for activities like traffic stops or ticket citations. These numbers are completely arbitrary and do not reflect the needs of the community. There’s a word that actually does start with C! Community!”

Sources say that Big Bird and Elmo continued discussing police reform for several minutes before being disrupted by Cookie Monster, who incorrectly assumed that the letters ‘ACAB’ were short for ‘All Cookies Are Beautiful.’

At press time, members of the Sesame Street community released a joint statement to say that, while generally they are accepting of all animals, they wanted to make one particular message loud and clear: “fuck pigs.”