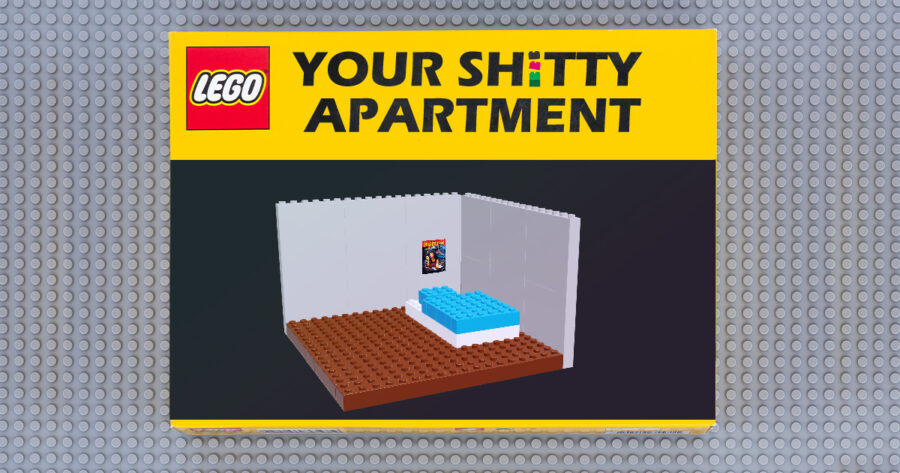 ENFIELD, Conn. — The LEGO Company released a new set today that will allow you to bring that underwhelming little place you call home to life, excited sources confirm.

“We know that it isn’t just kids building LEGO sets anymore, so we wanted to cater to our adult audience as well,” LEGO CEO Neils B. Christiansen said during the reveal. “The Hogwarts set is fun for kids, sure, but we wanted to do something more relatable for grown ups — you’re not a Gryffindor, you’re a busboy, ya know? That’s why we at LEGO are excited to announce our new ‘Adulting’ set.”

The 650-piece set is one of the simplest sets LEGO has ever released. The small number of pieces is reportedly due to your tiny apartment barely being furnished and the closest thing you have to wall art is an old Pulp Fiction poster.

“I just love the attention to detail,” said LEGO enthusiast Reggie Gad. “You can actually build the pizza box that’s by the futon bed right now from the Domino’s I ordered last night and didn’t put in the fridge. It even still has half a pizza in it! The empty cans of Pabst on the desk are a nice touch too.”

Other LEGO fans were reportedly unimpressed by the recreation of the lackluster apartment you can barely afford rent on, much like the date you brought home a few weeks ago.

“I just feel like it could be tidier,” your mother complained of the set. “Look at this! Doesn’t he ever do laundry? All those socks on the floor by the laundry hamper — it takes two seconds to pick them up. I can’t be the only one who sees them. I’m sure I don’t even want to know what the inside of that bathroom looks like. When I go to his apartment, I’m always stepping on his socks. Now I’m going to be stepping on LEGO versions of his socks. I hate it!”

At press time, LEGO announced an upcoming companion set based on the house your ex-girlfriend lives in with her husband and new baby.