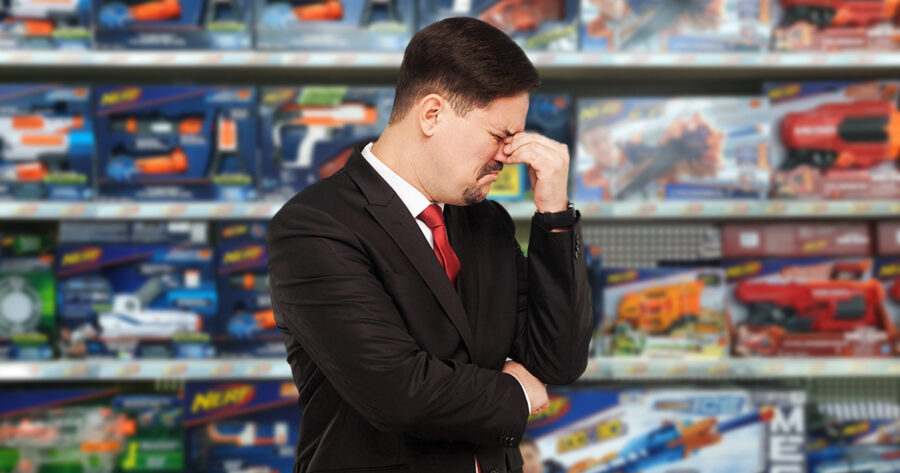 PAWTUCKET, R.I. — Hasbro CEO Brian Goldner released a video today pleading with gamers to stop using the word “nerf” to refer to when weapons in video games are made weaker.

“There’s nothing I love more than gamers. My company is built around and for those who love to game. That is why it is so heartbreaking for me every time I hear someone refer to my company, Nerf, only to discover they’re actually talking about weakness,” Goldner said, wiping tears from his eyes, in the 45-minute video uploaded to YouTube. “When I think of Nerf, I think of bravery. Nerf, to me, means ‘powerful.’ Nerf exists to help kids grow and have fun and sure, our products are soft and squishy, but that doesn’t mean they’re less than. Please, gamers! I know there’s nothing I can do to force you to change your ways. But I implore you to find another word for weak. One that doesn’t cause so much harm to this CEO.”

Gamers were quick to dismiss the video as “nonsense,” criticizing it widely across social media.

“There’s a lot of shit I deal with as a gamer and I’d rather put a bullet — a real one, not some yellow sponge bullshit — through my fucking skull than let someone tell me what words to use,” said redditor u/GodOfBoar63. “I will NEVER stop saying nerf to mean making a weapon or item weaker in a game. You can pry nerf from my cold, dead hands, you sack of shit developer. And yeah, that’s right, the CEO of Nerf is technically a game developer, as he is someone who develops a game. That means we are inherently opposed. We’re at war.”

“You know honestly, I’d be kinda down to stop using the word ‘nerf’ considering how deeply sad it seems to make this strange man, but it doesn’t seem quite fair that he suggested ‘mattel’ as an alternative,” said u/PM_ME_PICTURES_OF_PICKLE_DICK. “Because, like, are we gonna end up with another strange weepy video from the CEO of Mattel next? I’m not an expert on owning a company, but if it were me, I’d simply change the name of Nerf to Buff. Seems like an incredibly easy fix.”

Following the lack of success of his video, Goldner reportedly reached out to several members of Congress to see about passing a bill banning the use of the word “nerf” in a negative connotation.

“I totally get the impulse, considering most of my decisions are based on which CEOs have given me money in the last few months,” said a Senator who wished to remain anonymous. “But I’m pretty busy right now trying to pass a bill that makes it so I can get more vacation days. It’s simply going to have to wait until the next budget cycle.”

At press time, following the advice of friend and fellow CEO Jeff Bezos, Hasbro began buying up several video game companies for the exclusive purpose of forcing them to stop using the word “nerf” in patch notes.