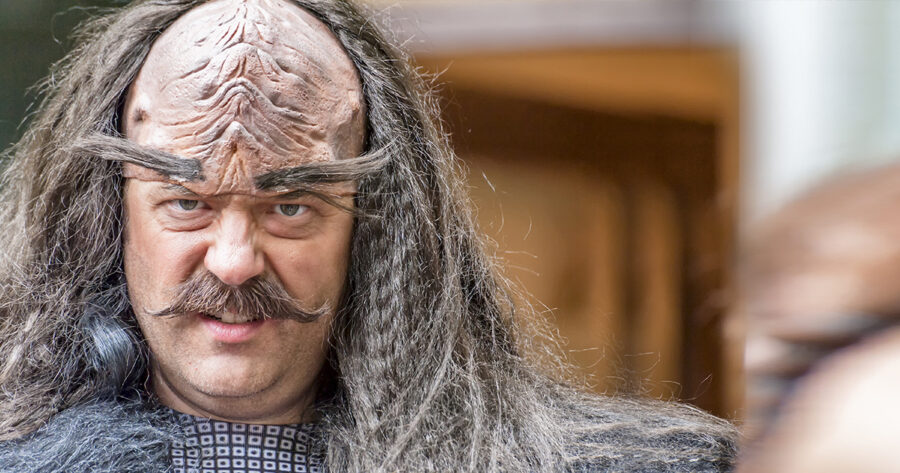 CLACKAMAS, Ore. — Citing irreconcilable differences, local Trekkies Paul and Lisa Ash went into painstaking detail to make sure that the dissolving of their ten years of marriage were as faithful to the Klingon rites of divorce as possible.

“We are both huge Star Trek fans and also have grown to resent one another with an anger that can only be expressed in Klingon,” explained Lisa Ash, also known as Odrona Wezazh, while putting on her prosthetic forehead. “It was kind of a no-brainer, just like my ex-husband, that stupid petaQ.”

Uncomfortable friends and family were invited to witness the ceremony, whose ceremonial details were mostly taken from the Season 3 episode of Star Trek: Deep Space Nine titled “The House Of Quark.”

“I wasn’t sure what to expect,” said Paul’s mother, Linda Ash. “Suddenly, Lisa slapped Paul, shouted something in another language, and then spit on him. Honestly, even though I was taken aback, it seemed a lot more cathartic than how my first divorce went.”

“All Klingons have to do is shout ‘ngoS tlhogh cha’ which translates to ‘Our marriage is done’ and that’s about it,” explained Lisa’s lawyer, Michael Weinsoft, who also goes by H’onaq Sompeck during Klingon legal proceedings. “Divorce among couples who practice a Klingon lifestyle is pretty common since it’s such an abrasive language, so it’s a really interesting and lucrative field to break into as a lawyer.”

“I’m happy with the agreement so far,” said Paul Ash, also known as Jutaq Udho, who chose to wear his Klingon Death Ritual uniform for the proceedings — a passive-aggressive jab that was lost on most of the attendees. “But if that Ha’DIbaH quvHa’ thinks she’s gonna get my Voyager Blu-Rays she’s out of her Hu’tegh mind,” Paul added, while sharpening his custom made Bat’leth.