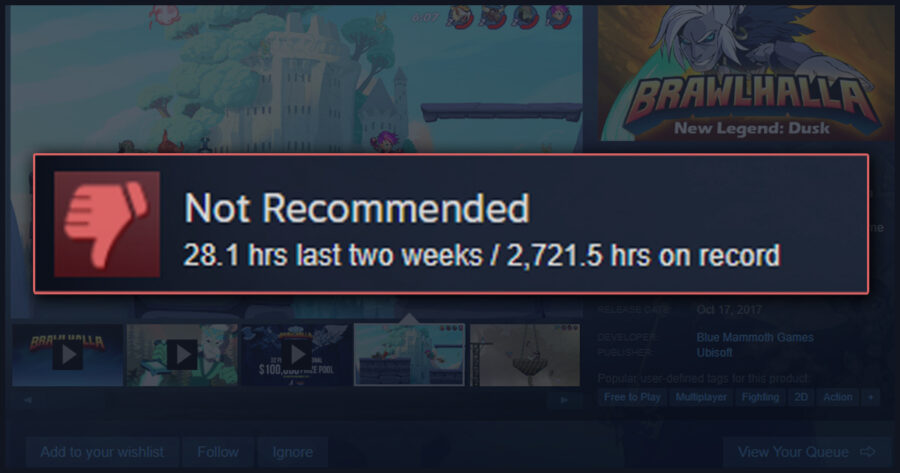 BROCKTON, Mass. — Prospective game buyer Jordana Ritter has reported feeling conflicted about what to take away from a negative review on the Steam website written by a user with over 2,000 hours logged in the title in question.

“I don’t have the Switch and I was feeling really jealous of my friends playing Smash,” said Ritter. “And I heard about this game Brawlhalla, which is like a free PC knockoff version of it. I checked the reviews to see what people thought about it, and there was a guy who had spent literal months of his life playing it telling me not to waste my time. What do I do with that? It’s a joke, right?”

Although many users aspire to contribute specifically humorous and fictional reviews to the digital storefront, one feature that can not be misrepresented is the displayed time a reviewer has spent with the game. This features allows readers to get an idea of how informed a user’s submission is.

“After playing this game daily for two years, I can say DON’T EVEN BOTHER,” began the negative review from steam user I_Am_An_Actual_Armadillo, which six people reported as having found useful. “This game is hard and cheap and the community is toxic. Matchmaking is a joke, and the progression system is maddening. Playing Brawlhalla used to be fun, and then after a while it felt more like a chore, or a job. Maybe that’s why I spent 65 work weeks playing it.”

With the review having had no discernible impact on her decision to try it or not, Ritter downloaded the free title to indulge her curiosity. After logging several minutes, she quit the game and submitted a review of her own.

“It took me exactly four seconds to see that this game is a lame Smash rip off meant for little kids and people who give a fuck about Rayman,” read her negative review. “DON’T EVEN BOTHER.”