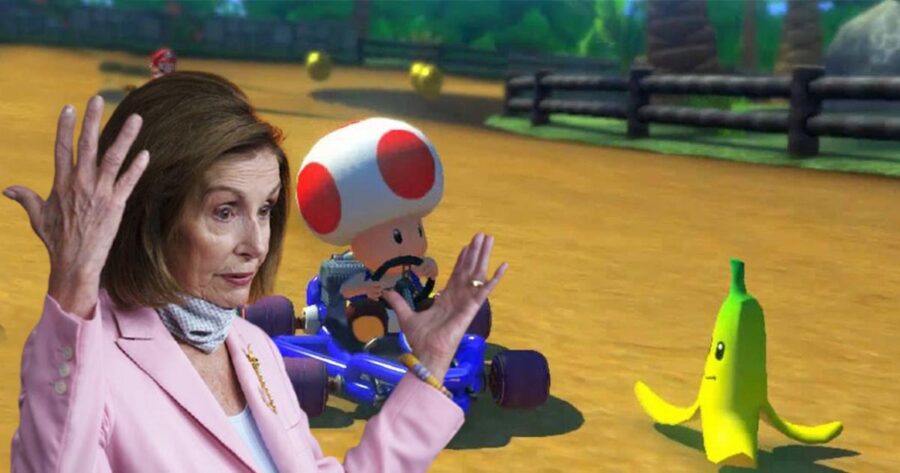 WASHINGTON — Nancy Pelosi, Speaker of the House of Representatives, hit a banana peel on purpose this morning at Mario Circuit, after inadvertently reaching first place.

“Ugh, shit. God damn it. What the fuck am I supposed to do now?” the congresswoman mumbled, after the race leader got hit with a blue shell, leaving her up front. “Sorry, what I mean is, um, it’s good that this is happening! I love winning. It’s a new day for all of us, here on the Mario Circuit, now that I’m in first place. I would sure hate to end up in second again.”

Pelosi spent nearly an entire lap in first place, desperately searching for a believable obstacle to ram into, before finally locating a banana peel along the edge of the track.

“I am shocked by this totally unexpected defeat, which I did not want to happen at all,” said Pelosi, the exact moment she veered dramatically off course into the peel. “I will fight tooth and nail to get back up front, despite all the heinous attempts by opponents to keep me back. That’s why I will need to hold onto the controller for another race or two.”

“It’s long past time we removed the banana peel as an item, and if I had the power to do so, I absolutely would, no question. But I don’t. My hands are tied,” read the statement, released immediately after the race. “I want to be very clear about that: There is absolutely nothing I could have done to prevent this, and there is nothing I will ever be able to do. Shucks.”

The eventual race winner remains under investigation for allegedly spilling beer all over his opponents during the race, then trying to unplug their controllers when they weren’t looking