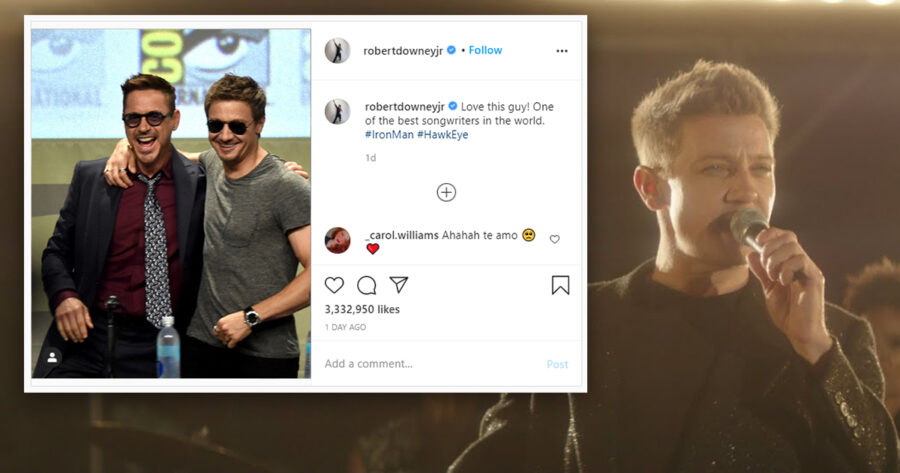 “Look, it’s not that we necessarily love the song, or even that whole style of music, whatever that style of music would be called,” said Don Cheadle, talking about Renner’s single ‘Heaven Ain’t Got A Name,’ released last year. “It’s more about us supporting our friend and saying, ‘Yes, look, this is a truly inexplicable decision, but surely no single completely disappointing, confounding thing should make a person entirely redeemable, right?”

The song was released last year, amidst a bizarre year for Renner that also saw the release of an app focused mostly on providing Jeremy Renner related updates.

“I never thought I would write and record a song in my life,” said Renner. “But then I had that unforgettable night. When I met the woman whose lips tasted like lipstick and Tanqueray, standing there dancing to the jukebox, I knew no one would believe me if I told this story in any other way. I would like to thank my brothers and sisters in the MCU for having my back while the world comes to terms with the fact that I put this song out there last year. Like you can straight up go find it and listen to it right now.”

Despite being a clear departure from the musical tastes of most of his Marvel costars, many took to their social media accounts to defend the soulless attempt at an Imagine Dragons style crossover hit.

“It’s ok if your song sucks shit,” said Mark Ruffalo on Twitter earlier today. “What matters is that we are all voting in the midterm elections.”

As of press time, Ruffalo, Cheadle, and many others had released a black and white viral internet video featuring them singing ‘Heaven Ain’t Got A Name.’