Marvel Snap Season 2: All About Warriors of Wakanda

New content is already on its way to card game sensation. 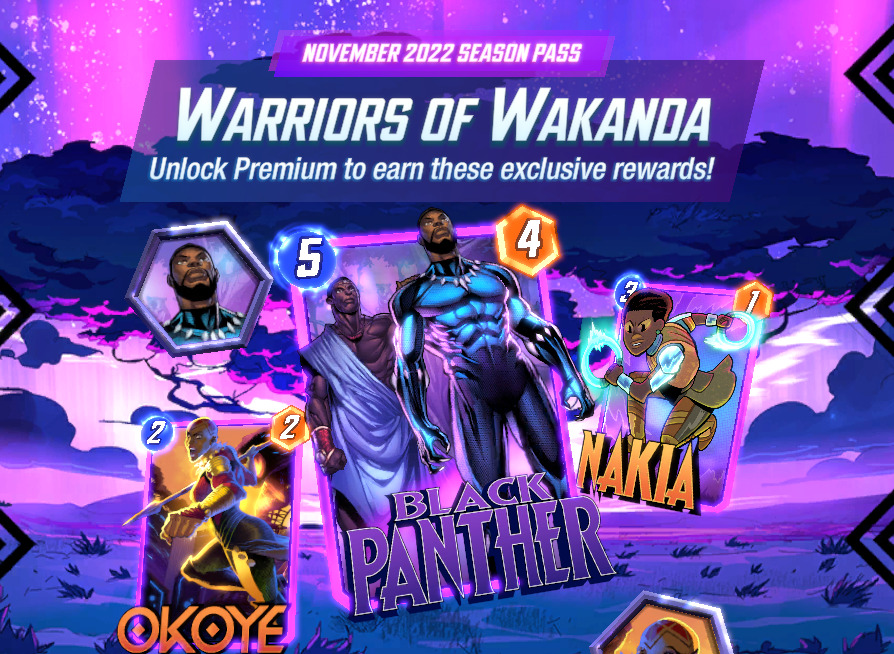 The mobile game taking the world by storm, Marvel Snap, is getting more content starting today with Season 2. After introducing the game’s full release with a season themed around the symbiotes, featuring Miles Morales as a unique card, and new variants for heroes like Spider-Woman.

It looks like Marvel Snap‘s season 2, though, will do something a bit different. The new season is titled “Warriors of Wakanda.” This is an obvious tie-in with the upcoming Black Panther: Wakanda Forever, and features numerous characters from the movie. New variants, new avatars, and even a new card featuring characters from Wakanda both new and old to Marvel Snap.

A new season brings a new battle pass with new rewards, including variants, and Black Panther, the season’s new card. We’ll get more in-depth on Black Panther himself more below, but here are all of the other rewards you can expect to earn on your way to this Season’s tier 50 reward: the Ancestors variant for Black Panther.

With the new season and battle pass, Marvel Snap‘s War for Wakanda is headlined by a new card: none other than the Black Panther himself. The base stats of the card aren’t that impressive on their own: he costs 5 energy, and has 4 power. However, his ability is quite interesting: “On Reveal: Double this card’s power.”

There’s a few combos that seem like they would be good combos with this ability. Naturally, two of the best characters to combine are other Wakandans. Nakia (On Reveal: Give the 2 leftmost cards in your hand +2 power), Shuri (On Reveal: Double the power of the next card you play), and Okoye (On Reveal: Give every card in your deck +1 power) are great pairings for this card. If there’s an especially competitive location, perhaps even Odin (On Reveal: Activate the On Reveal abilities of your other cards at this location) could be a good pair for Black Panther. But, as the meta around this new card develops, I’m sure other great pairings will emerge!