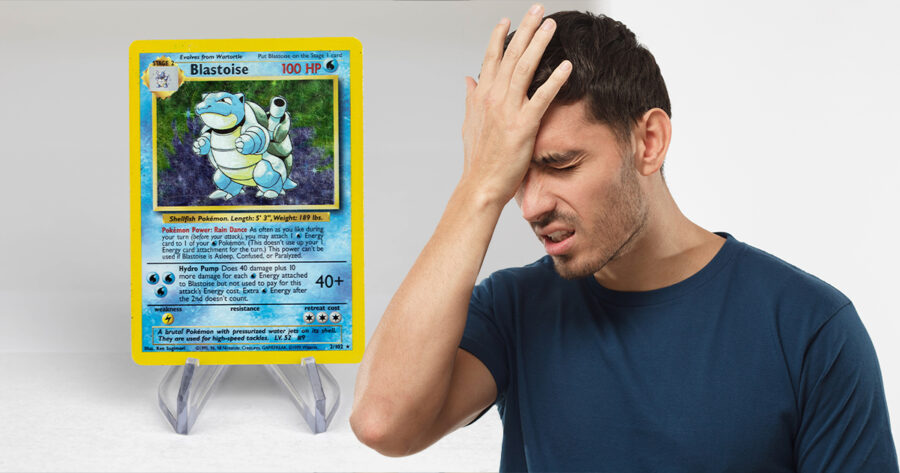 ALLENTOWN, Penn. — Local man Dave Roberts is reportedly distraught after realizing he got fucking hosed in a Pokémon card trade he took part in nearly twenty years ago on a school bus in his hometown.

“I got fucking got by that motherfucker,” said Roberts of the incident in which he gave an older kid his first edition holographic Blastoise in return for a Geodude and an Onyx. “Fucking Ben Meyers. He told me I was coming out on top because he was giving me two cards, and I let him talk me into it because I liked Brock and wanted his Pokémon. I got fleeced!”

The recent resurgence in collectable card games led Roberts to look into the value of his collection at a local game store, in turn causing the painful memory to resurface.

“He brought his cards in and there wasn’t too much worth anything. I told him the only real money cards are first editions of the big names like Charizard, Mewtwo, and Blastoise, and once I said ‘Blastoise’ he started visibly shaking,” said Rudy Tolan, owner of Nightmare Wizards game shop. “When I told him that Blastoise was worth a couple grand in mint condition he damn near punched right through our display case.”

“We’ve all made a bad trade, but this is a life-changing amount of money, even as a third grader. He should have known better,” said DiPasquale. “The fact that he hasn’t tried to hunt down Mr. Meyers since the revelation is honestly surprising.”

At press time, Roberts’ wife was last seen perusing Meyer’s social media to see if she could trade up in her own right.