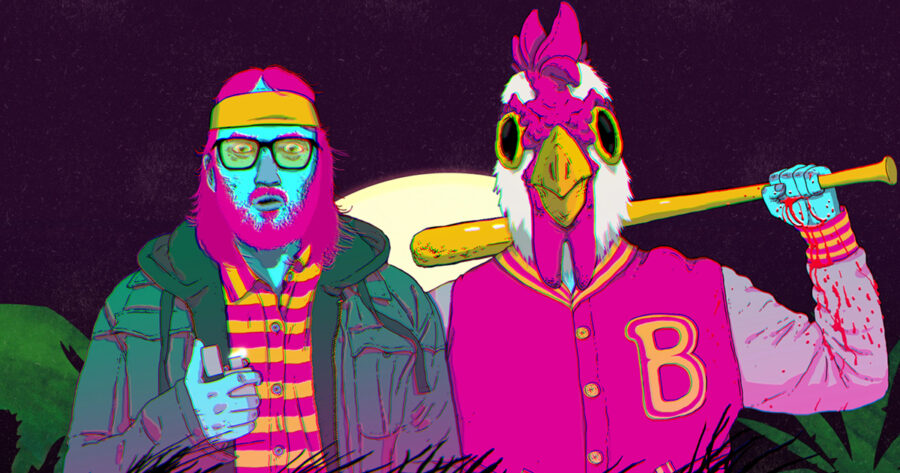 INDIANAPOLIS — Local gamer Jamal Barker has at-last played the game alluded to by his favorite soundtrack of all time, the Hotline Miami OST, sources on the other side of his loud speakers and paper thin apartment walls report.

“This is such a revelation,” said an enthusiastic Barker. “I got here the same way most folks do: ‘Lofi Hip Hop Beats to Relax/Study To.’ You listen to that station enough and next thing you know it’s all ‘Retro Synthwave Beats For Extreme Coding’ and finally you’re listening to something called ‘Hotline Miami’ every night while you browse Reddit. Throbbing bass beats, a waterfall electric drums, the retro synth riffs from beyond the reaches of humanity, it was amazing.”

“When my friend mentioned there was actually a for-real Hotline Miami game, I was beyond excited!” added the 29-year-old Barker. Upon picking up a digital copy of the classic action game, Barker has so far been amenable to the gameplay, but the game has not completely lived up to the musical choices he had grown fond of.

“I’m gonna be honest with you, I expected Hotline Miami would be a game about having sex with a robot,” said the longtime soundtrack fan. “I mean the shooting and animal masks are cool and fun, but at the very least I figured it would have a few car chases where the cars can fly and/or talk to you. I’m happy I bought it, don’t get me wrong. Just confused.”

Barker did, however, note one element that stuck to his expectations. Said Barker, “The game is very faithful to the soundtrack in that I keep restarting it over and over. Just like how I listen to the soundtrack. Seriously, can you please help me not die so damn much?”

This article is sponsored by Devolver Digital. Have you played Hotline Miami? NO?! Bro, are you serious? It’s one of those games you have to play. It’s sick, dude, you’re gonna love it. I’m sending you the link to the Steam page right now. It’s straight up $10. Let me know when you play it. I wanna hear your thoughts on it. Oh my god, and the soundtrack?! OK OK I’ll stop, just check it out.