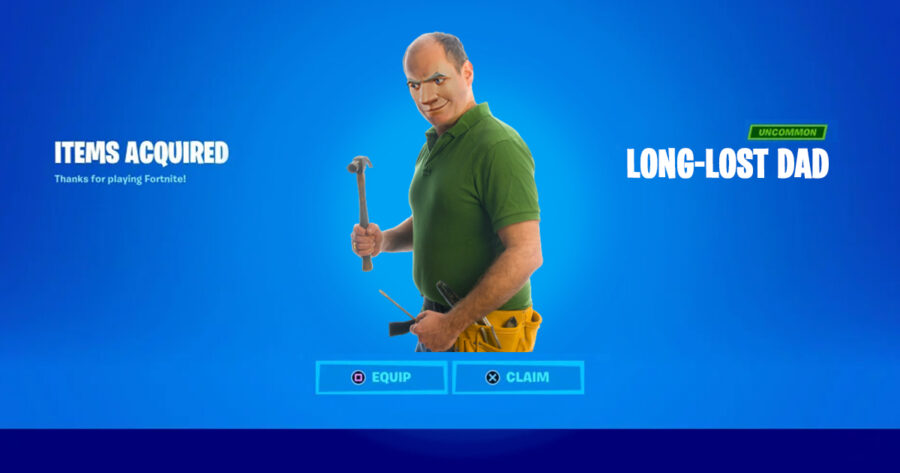 CARY, N.C. — Epic Games has announced that the new DLC character coming to their hit battle royale video game Fortnite is Kevin Schumacher, the long-lost father of Chris Schumacher, who walked out on his family seventeen years ago.

“We’re so excited that Chris Schumacher’s long-lost father, Kevin, who claimed he was going out for some smokes in 2003 and never returned due to the pressure of work and sudden family life, will be fighting for the victory royales alongside Master Chief, the Mandalorian, and the whole Marvel cast!” explained Fortnite design lead Eric Williamson. “When Masahiro Sakurai said that Super Smash Bros. Ultimate would have ‘everyone’ in it, we took that as a personal threat! So we made sure to gather each and every major pop culture character to put into our game, and now we’re reaching right into the very lives of our actual players. Get ready to play as Kevin this week for just 900 v-bucks!”

According to those close to the situation, Chris Schumacher has reportedly been catching up on time with his dad, playing Fortnite with his virtual avatar all across the chapter 2 season 5 map.

“As an avid Fortnite player, it was definitely weird to see my actual real-life father show up in the game as a playable skin, especially because they aged him up so he looks how he would if he were around in 2020. I guess that’s what my dad would look like if he was back in my life… and shooting Wolverine with a pump shotgun,” said Schumacher. “You get my dad for free as part of the battle pass and I’ve already leveled him to the point where I get the cigarettes he went out for in 2003 as a back bling. I guess in a way it made me feel better to see him actually pick up those smokes… just not enough to make up for the emotional trauma of him leaving in the first place.”

At press time, Chris Schumacher had gotten emotional after winning a solo round of Fortnite playing as his father, hitting the emote that makes him turn to the camera and say, “good job, son” and then the emote to make him floss.