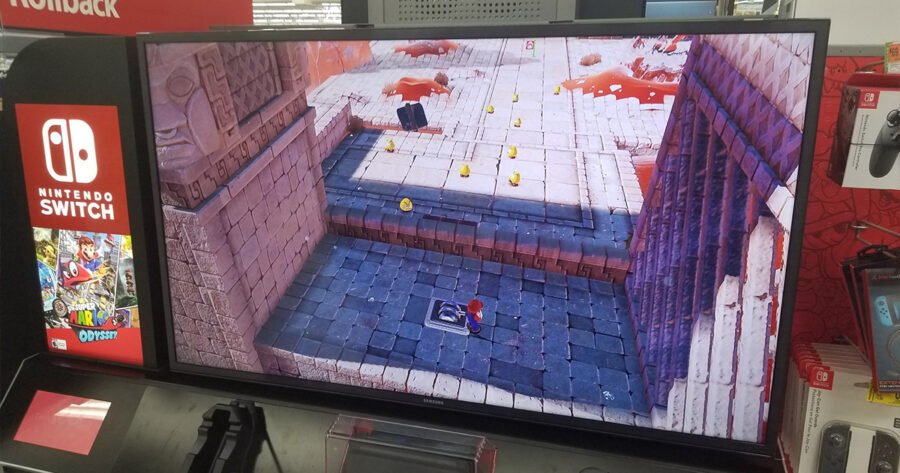 Huge news just unfolded before our very eyes that could forever alter the trajectory of both the gaming world and our weekly grocery run to Walmart. During our routine ambling through the electronics section, we spotted the Switch Demo, which after having the tutorial for Mario Odyssey for the last five years, had finally been updated to Splatoon 3, a game we were considering buying.

This news was bittersweet, however, as a surly eleven year old had parked his fat ass at the console for at least fifteen full minutes, and even though we wandered away to the Lego aisle for a bit and came back later, he was still there stumbling over the game’s menu screen and not fully appreciating the motion control technology.

In this darkest hour, finally a beacon of light shone through, when the child’s mom called out for him from the next aisle over, reigning justice with a thunderous ‘Tyler! We’re leaving!’ Tyler held his ground as best he could, but when our savior threatened to leave Walmart without him, the helpless child realized he held no dominion in the situation and quickly acquiesced to the righteous woman’s whims.

Finally, the time is ours to explore every facet of the Splatoon 3 campaign’s intro mission at our own pace and leisure. While only a small victory on the surface, the larger, symbolic victory is shared with gamers everywhere.

As we handle the sticky, greasy Joy-Cons and peer through the dirt-flecked plexiglass protecting the screen, a tear rolls down our face reflecting on the tyranny of the Tyler era, until a satisfied grin creeps across our face the realization dawns on us that never again will we have to kowtow to his selfless demands, and not even the soft hum of Walmart’s fluorescent lights nor the panicked PA announcement about the enormous fire that has begun to engulf the entire department store can ruin this triumphant moment.