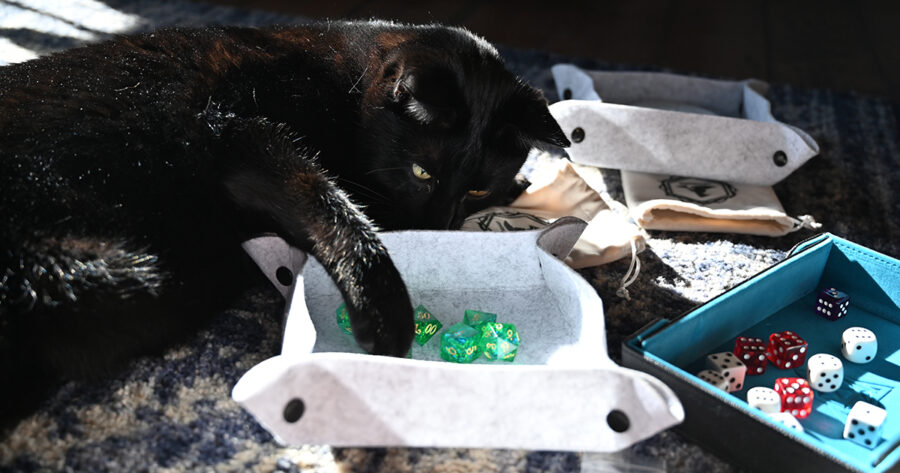 “Every time we start to get somewhere, Bubble jumps onto the kitchen table and knocks over absolutely everything,” Dungeon Master and cat owner Harvey Gatto said. “Why does he do this? I don’t know how, but it seems that a group circling a flat surface while making strange noises and eating snacks in colorful clothing will somehow attract pets.”

Gatto’s friends have so far patiently endured Bubble’s complete disregard for the game’s carefully arranged elements. Figurines, tokens, maps and pizza boxes have all been sacrificed by the rotund orange feline to a surprisingly noisy tiled floor.

“I adore Bubble, but it’s impossible to stay in the zone when he’s there,” player Eve Bisad confirmed. “I’ve been playing as an Elven Beast Tamer for the last year or so, and I’ve gotta tell ya, nothing sucks the fantasy out of effortlessly leading armies of lions than constantly having a chubby tabby knock salsa into your lap.”

Years of studying the game’s deep lore and combat system have yielded no practical solution for Bubble’s antics. The group’s best attempt has been to integrate him into the game as “Diablo,” a randomly-encountered, 823-foot-tall Chaotic Evil dragon that deals Hit Points equivalent to that of a “Soviet-era ballistic missile.”

“Every goddamn game,” housemate Kevin Muur mumbled to no one in particular while staring into a wall. “Every game. Carcassonne tiles with teeth marks. A Cosmic Encounter set with three missing ships. Harv and I haven’t even had an uninterrupted round of Catan in years. I dream — I pray — of an unscattered Longest Road. Please… please, grant me peace.”

Despite their frustrations, Gatto confirms that the group still loves Bubble’s company, and he has at least “cleared more goblins off the map than our Cleric ever has.”