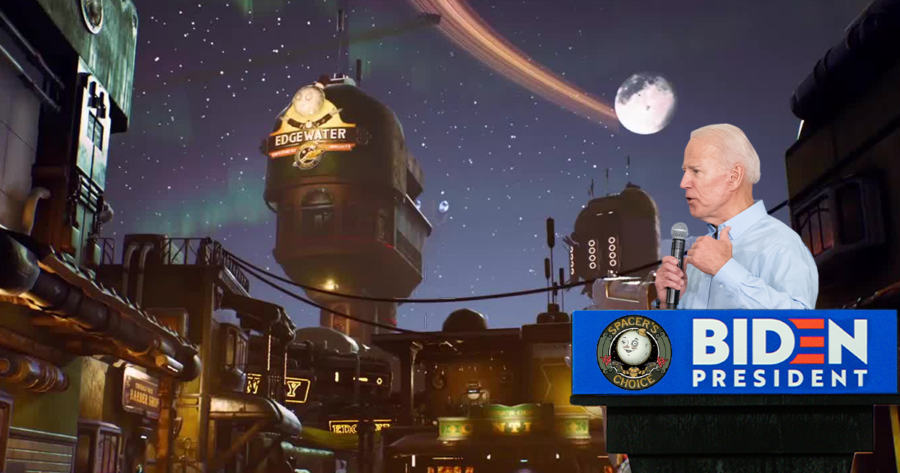 EDGEWATER — Democratic nominee hopeful Joe Biden has been endorsed by Spacer’s Choice, the candidate announced over the weekend.

“I am honored to have the support of such a consumer-friendly brand,” the former Vice President told a group of rally attendees Saturday afternoon in Edgewater, squinting hard towards a teleprompter behind the swath of people. “The folks of Edgetown (sic) need more ethical corporations willing to bend to their needs, and Spacer’s Choice has always been there for them to offer a reasonable amount of support as long as it’s profitable.”

Cell phone footage of the event showed the former VP riffing on the heels of the announcement, saying, “I had a cousin who worked for Spacer’s Choice back in the day. And he was a, he was a kind of fella that you, he was a lovely guy. I really loved him, Jill and I miss him every day.”

“When I was a lifeguard, we would pop Lunar Eclipse Mix by the pool for fun. It was a different time. The times have changed, that’s for sure,” Biden said before sucking on Edgewater resident Reed Tobson’s finger.

Rallygoers revealed their confusion about the announcement and Biden’s improvising, unsure of how it could possibly help the campaign.

“Spacer’s Choice isn’t necessarily a ‘quality’ brand. In fact, most people around here have been hurt more by Spacer’s Choice than helped. I haven’t been to the doctor in two years, even though all the salty food they sell has been giving me chest pains,” said undecided Edgewater voter Patricia Johnson. “When the Biden campaign announced that they were getting a big endorsement, I was hoping it would at least be Groundbreaker or something.”

As Biden left the stage, he emptied an entire chamber from a Spacer’s Choice pistol into the sky in an attempt to appeal to pro-gun voters.