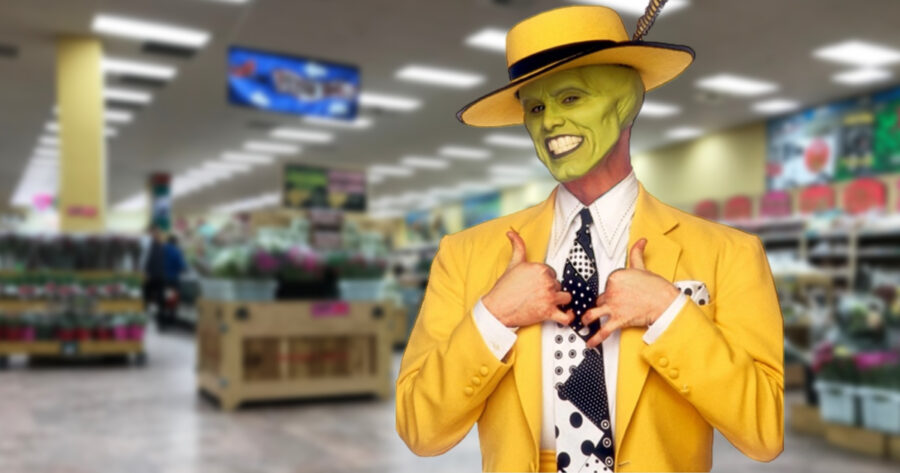 LOS ANGELES — In an effort to prevent the spread of coronavirus to those in a local Trader Joe’s, actor and comedian Jim Carrey was seen wearing a green mask that covered his whole face and turned him into a mischievous gangster with superpowers.

“I’m not wearing any gloves! Ooh, somebody stopppp me,” Carrey exclaimed, holding a package of frozen multigrain rice, his arms stretched out down the aisle. “It’s grocery time. G, R, O, C, E, R. Y? Because I… gotta!”

According to those at the grocery store, patrons were generally unhappy to see the celebrity causing mayhem.

“I waited three hours in line outside in the rain to get in here and buy some eggs. I love Jim Carrey, but this isn’t the time to be running around the store, spinning around and all that,” said 49-year-old Marsha Velasquez, her voice muffled through a cloth mask. “I was going to pick up the last package of smoked salmon and then Jim came at me in a tornado and snatched it. You know exactly what he said next. Don’t make me say it.”

After a long pause and a sigh, Velasquez continued, “smmmoookkkinnn.”

Trader Joe’s employees were forced to remove Carrey from the premises after he failed to remain six feet away from other customers or stop doing impressions of old movie quotes at them.

As of press time, those in the Trader Joe’s reportedly felt momentary relief quickly fade when someone noticed that Jamie Kennedy had entered the store.