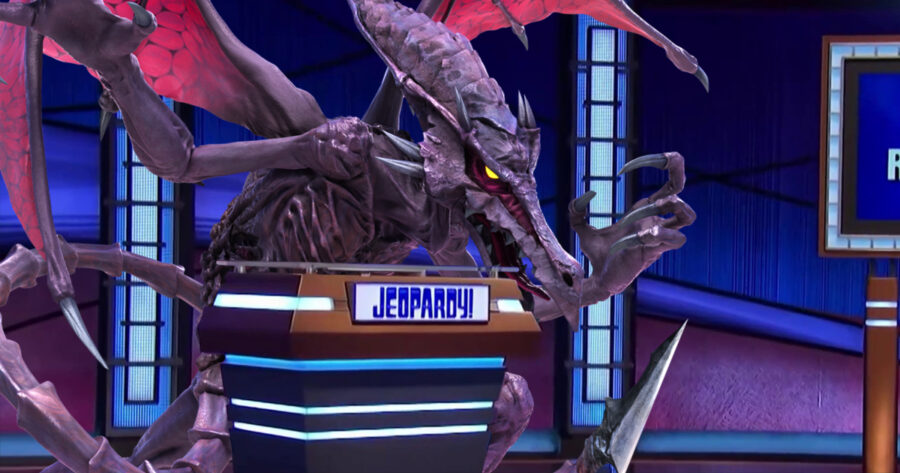 LOS ANGELES — With their controversial search for a host to replace the iconic Alex Trebek still in progress, Jeopardy! producers issued a statement detailing why fan favorite space dragon Ridley from the Metroid games won’t be considered for the role; he is simply too big to fit onto the stage, they claim.

“Look, we all love Ridley just as much as anybody else,” said George Fenton, a producer on the long-running trivia game show. “It’s just that he would simply tower over the podium, cover up a good half of our question board, and I have to assume really put the human contestants on edge at a time when we like to see them relaxed and able to play the game calmly. Sorry folks, you’re never gonna see Ridley on the Jeopardy! stage. There’s no way. He’s just too big.”

Fans insisted that the quotes to the press were merely lip service until Ridley’s inevitable debut as host happened.

“Okay, I’ve heard this all before,” said gamer Trudy Baxter, referencing the similar narrative used for years to keep Ridley out of the popular Super Smash Bros. series of fighting games. “He’s too big until he’s not. I’m sure he wasn’t exactly on the first shortlist they put out, but every decision they make seems to get them in even hotter water with the fanbase, and this could really go a long way, I think. They should at least consider it. If the new Jeopardy! host isn’t LeVar Burton or Ridley from the Metroid games, we’re going to become a Price is Right house.”

The calls for a new host have persisted ever since Trebek’s departure, even remaining after replacements were initially announced.

“They told the world I would be hosting special tournaments and things like that,” said actress Mayim Bialik, who along with executive producer Michael Richards were named as successors to the position, before backlash concerning Richards caused him to step down. “And almost immediately I started to read online that they wished they’d selected some flying bird creature thing instead of me. It’s like, okay, did you not see when he accidentally lit his podium on fire during his rehearsal week? Or are we just going to overlook that? We can’t have a man that spits fire reading these contestants’ questions!”

As of press time, producers revealed that some goddamned Fire Emblem character was just going to be made permanent host.