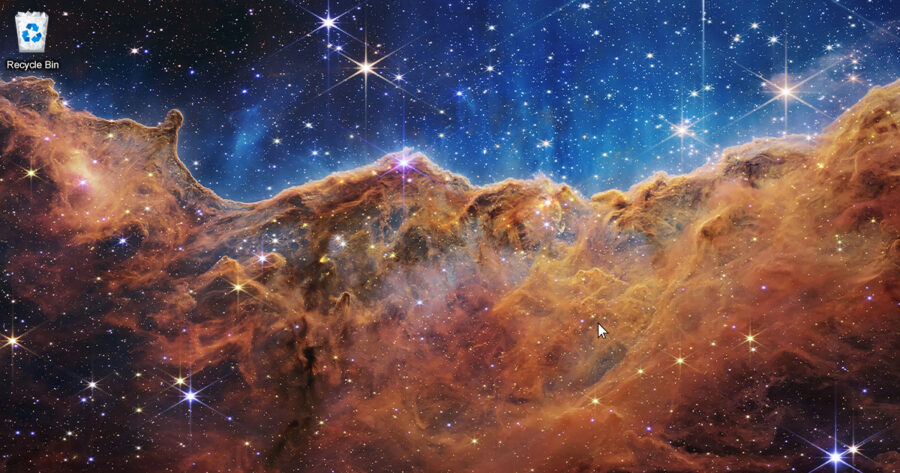 GREENBELT, Md. –– Scientists at the NASA Goddard Space Flight Center have hailed the latest photographs from the James Webb Space Telescope (JWST) as the next era for humanity’s desktop backgrounds.

“JWST offers an unprecedented look into the final frontier of human exploration: finding the sickest wallpapers for your computer,” said Senior Project Leader Ken Decker. “The future is bright for monitors everywhere. We are seeing Google results for ‘dope space desktop images 4K’ we never thought possible during the Hubble Space Telescope era. Back then, if you wanted a better picture of a nebula or galactic cluster for your desktop background, you had to imagine it in your head. I would often spend hours at work, staring at my wallpaper of the Carina Nebula, hypothesizing: ‘What if it were like that, but cooler?’ Thanks to this watershed moment in twenty-first century science, I no longer have to imagine.”

For the team at Goddard, the scientific focus of their work has not detracted from the overwhelming sense of awe that the pictures inspire.

“We actually have a viewing room in the facility used exclusively for the JWST images. There’s blackout curtains, lava lamps, and those new microgravity bongs the team over at Ames Research Center have been working on,” explained Deputy Engineer Lauren Hatakeyama over the sound of ‘Space Oddity’ by David Bowie. “It’s vital that we curate an ideal viewing experience.”

When these photos of the distant heavens were released to the public, universal praise began to roll in immediately.

“I had just added a fourth monitor to my gaming setup when I got the Twitter notification about the JWST photos, so I guess you could say the stars aligned,” said local resident Patrick Roland, who now has the latest image of the Southern Ring Nebula set as his background. “And to think, I was about to take another screenshot of ‘Elite Dangerous.’ If JWST keeps taking money shots like these, I’ll have to buy a fifth monitor for the full experience.”

As of press time, NASA had already announced the next space frontier — excavating your desktop background from beneath layers of Chrome browser windows.