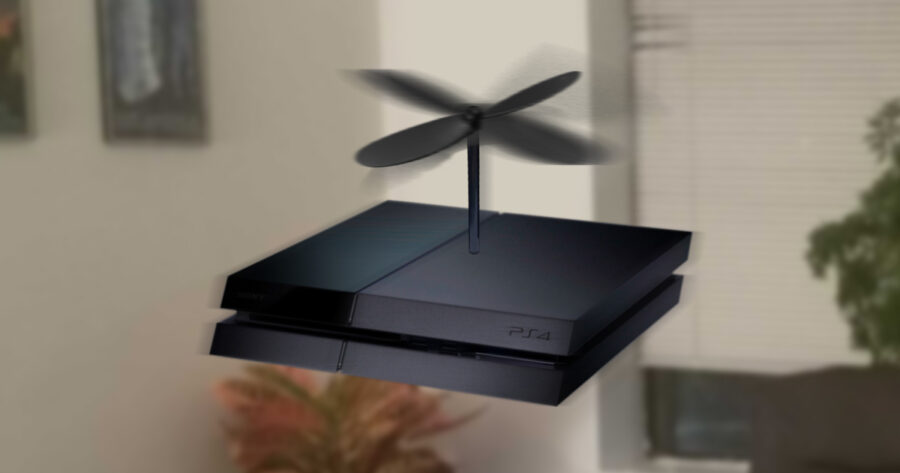 TUCSON, Ariz. — A seven year old PlayStation 4 that has been making more and more noise has reportedly grown a propeller and engine system and flown away from its owner’s bedroom.

“Fuck me, I didn’t think it had gotten this bad,” said Nate Wharton, shortly after the gaming console had flown through his bedroom wall. “It was getting louder all the time, and hot, too. I thought it might fritz out eventually or something, but didn’t think it would just straight bail on me one day. Damn man, I’ve had red-ringed Xboxes and Joy Cons with drift, but I have not had a system evolve before my eyes and vacate the room yet. How do I report this exactly?”

Sony executives insisted it was an isolated and explainable incident.

“Need I remind you that we’ve sold over 100 million of these things,” said Jim Ryan, president and CEO of Sony Interactive Entertainment. “That leaves room for a lot of freak occurrences. Are a few going to blow up? Sure. Get real hot? I don’t know, probably. Grow some sort of propeller and/or navigation system and proceed to escape its perceived captors? Almost certainly.”

While the bizarre news story was covered nationally to the delight of many, Wharton’s mother reportedly didn’t appreciate Sony’s attempts to get one over on her.

“First it was iPhones’ batteries dying after a few years, and now this bullcrap,” said Shirtley Wharton, Nate’s perturbed mother. “He tried telling me that this was a sign we should get a PS5, but I told him it was a sign he needed to put his shoes on and go track that damn PS4 down!”

As of press time, Wharton was seen a few streets over chasing his flying PlayStation4 with a pool skimmer, hoping it got stuck in a tree or something.