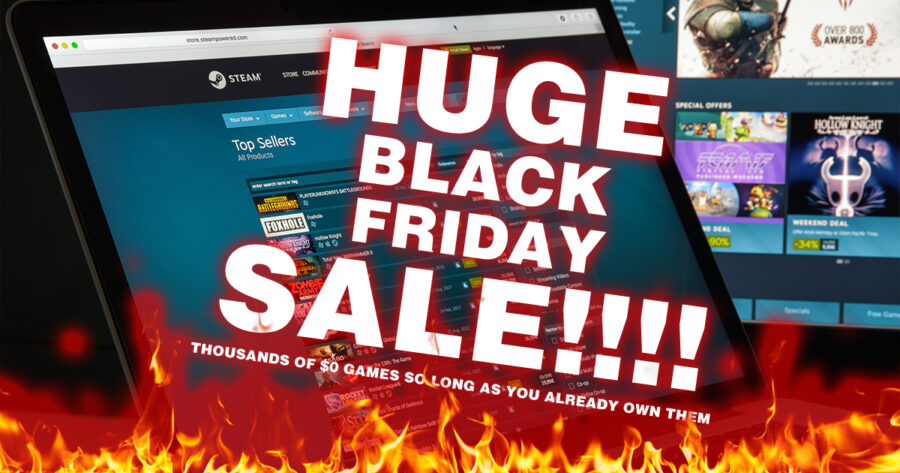 Good news, gamers! Black Friday is upon us, and with it comes some of the hottest deals this side of gaming. Whether you’re thinking about catching up with Horizon Forbidden West or some Nintendo game from five years ago that’s $10 off, consider this HUGE deal: your entire backlog is STILL AVAILABLE at *no additional cost!!!*

We know! We can’t believe it either. Included in this sale is your ENTIRE Steam library. You got a great deal on that indie bundle with 50+ hidden gems you never played. Now that deal’s even sweeter: you have 50 games, ALREADY PAID FOR! You’ll want to act fast, because you might forget about them tomorrow. Guess that’s why they’re hidden gems!

You also convinced yourself that buying Yakuza would force you to finally play Yakuza, so now you can get around to the WHOLE SERIES — without spending a single additional penny! Look at you! Remember: Cousin Dan told you to start with Yakuza 0. You can tell Dan, your Black Friday haul started at $0!

Just so you know, other shoppers are starting to notice this HOT DEAL. We don’t think that means much in terms of availability, honestly — but it’s worth pointing out. Tweets popular game deals poster Wario64, “Bandai Namco Sale. Free if already owned.”

Sure, $10 is a huge discount by Nintendo’s standards. And sure, Forbidden West will supposedly last you hours. You know what’ll last you MORE hours though? EVERYTHING YOU BOUGHT LAST BLACK FRIDAY! And the one before that! I mean, that new Life is Strange is an old Life is Strange by this point, come on!

Again gamers, you want to act FAST! Otherwise, you might be hit with the SLOW and STEADY realization that you are accumulating more games than you can possibly play, and sometimes Gamepass and PlayStation Plus freebies mean you have the SAME GAME ON THREE DIFFERENT PLATFORMS, and Black Friday and Cyber Monday will only make you HOARD more, but luckily there’s a WAY OUT — IF YOU ACT NOW!

Everything in your backlog, legally acquired or otherwise, is 100% OFF. Let’s see Best Buy price match THAT!