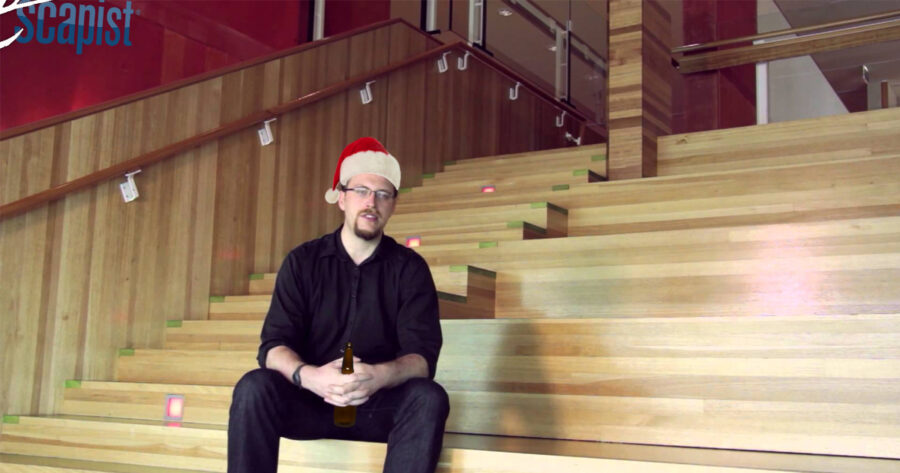 Croshaw, the last remaining paid employee of the waning video game site following a major wave of layoffs, allegedly described the eggnog served as “absolute bollocks — delivering the sort of sensation you’d imagine associated with flossing your teeth with the urethra of a syphilitic moray eel.”

“He just sort of stood around awkwardly, checking Twitter every now and then, waiting for other people to show up,” said Lindsay Magnusson, a bartender hired by the Escapist to serve drinks exclusively to the website’s most important asset. “Honestly, I was expecting to be serving a bunch of people, but I ended up just listening to his ideas for comic books — er, ‘graphic novels’ — most of the night. He kept asking for painkillers and Silent Hill 2 but we’re a bar so we don’t offer video games from 2001, or really any era.”

The reality of the situation was not lost on those at the Escapist tasked with planning the event, however.

“I know it may seem like overkill, rolling out the red carpet for just one guy, but Yahtzee’s all we’ve got,” said Mickey Cabrera, volunteer chief financial officer at the Escapist, as he completed his final Papa John’s delivery of the night. “Sure, a lot of us wanted to be there too, but I can’t afford to get rid of a shift. Not unless people in this neighborhood start tipping better.”

Ultimately, however, the fast-talking, hypercritical Brit spent the evening alone, comparing the complementary spinach puffs to “the green hair droppings off someone’s waifu pillow after its first round of chemotherapy.”

Waitstaff of the Sheraton Hotel in downtown San Francisco corroborated accounts that the entire evening passed without a single other attendee. A glimmer of hope appeared briefly in Croshaw’s eye when someone mentioned the name Tim Schafer, but it turned out to be the name of the bellhop.