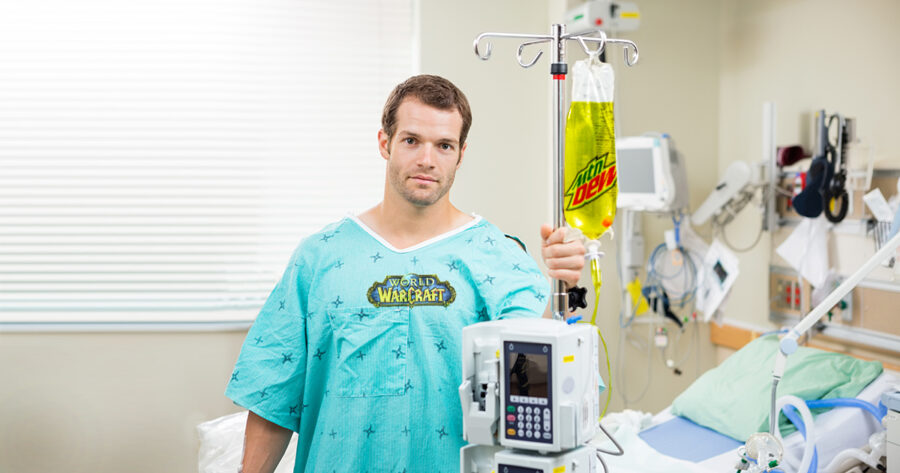 “Following up on the success of our 2009 Game Fuel soda promotion, Citrus Drip promises to help players explore Azeroth and their veins in a brand new way,” said Activision spokesman Jack Togg. “The innovative new IV technology means subscribers no longer have to reach for a bottle or glass to get the energy they need to push forward because it will already be coursing through their veins. You can’t waste those precious seconds during a high-level raid!”

The promotion comes as the popular MMORPG looks to keep their product in the news during the off-cycle between expansion releases.

PepsiCo representative Richard Kantorowski described the flavor of Citrus Drip as “bright green, with a lime twist, though if you can taste it something has gone seriously wrong and you should call 911.”

“We know gamers have always had Mountain Dew in their hearts and now they literally will,” Kantorowski said. “MTN DEW Citrus Drip will help you get in the zone, rack up awesome loot, hit those level caps, and potentially raise your risk of a stroke by 20 percent!”

“I was obligated to mention that last claim by the FDA,” he said.

The first-of-its-kind soft drink was developed by Mountain Dew’s team of Hardcore Flavor Wizards, noted for their innovative ability to turn Mountain Dew into different colors. Once purchased, gamers are instructed to use Citrus Drip as follows:

“[1] Wipe down with your arm with the Bangin’ Baja Alcohol Swab, [2] Apply the Dew Signature Tightenin’ Lightnin’ Tourniquet, and [3] Slamma-jam the Xtreme Needle into a prominent vein (after expecting to ensure the device is completely sterile to prevent infection).”

When asked whether any further Activision promotions were in the works, both parties declined to comment. Though one unnamed source did mention the possibility of a “Call of Duty” branded Doritos suppository.