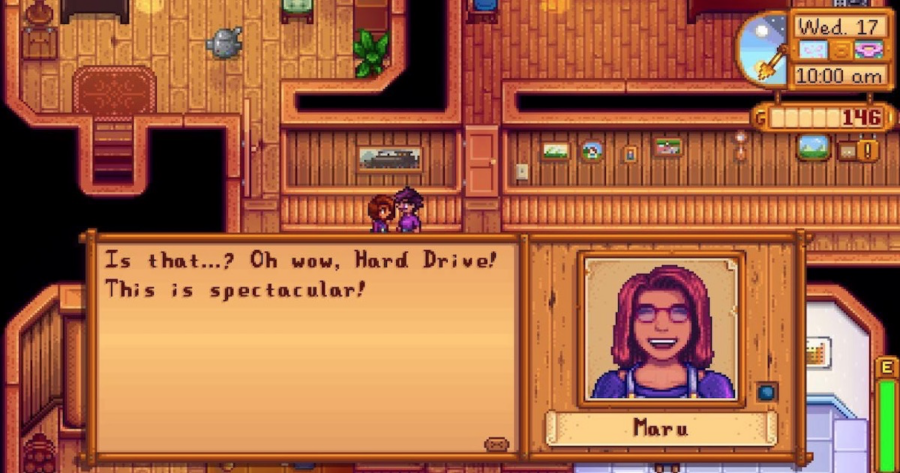 STARDEW VALLEY  — Local resident and gadget builder Maru has reportedly begun to feel a new sense of intimacy toward the young man who has brought her two large bars of pure gold each week for the past several years, the young woman and her family confirm.

“At first, I wasn’t sure about this guy. He would wait outside my bedroom door in the morning so he could hand me a bar of gold and abruptly leave. There was just something strange about him,” said Maru on a recent Wednesday afternoon, sitting on the bench near the Community Center. “But lately, there’s a certain attraction I can’t quite put my finger on.”

Sources claim that the man, who runs a valuable mining operation north of town along with lucrative farm, ranch, and monster hunting businesses, has gifted Maru these 400-ounce units of pure gold bullion at precisely 10:00 a.m. each Monday and Wednesday for the past two years, totaling a U.S. Mint book value of roughly $3,512,704, minus applicable taxes.

“I’m very protective of my daughter’s future, so I was anxious to see a young man hanging around so much,” said Maru’s father Demetrius. “Like any good parent, I took this opportunity to give Maru ‘the talk.’ I told her that when someone loves someone else very much, they transfer several thousand pounds of precious metal to them at regular intervals, and their love grows.”

At that point in the conversation, Demetrius began to choke up.

“It’s just so emotional, watching your child become an adult.”

The man offering the gifts claims to only have Maru’s future in mind, as well.

“I heard that Maru needed some gold to use as a conductor for that cool little gadget she’s been working on. Hopefully she’ll have enough soon,” he said, standing outside her family’s home at 7:00 a.m. last Monday morning. “Then I can switch to diamonds.”