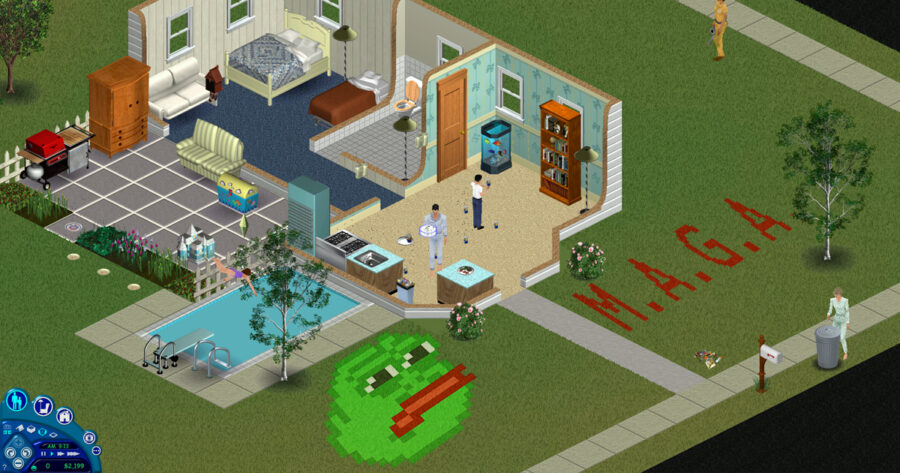 BEAUFORT, S.C.— Shantal Addams was shocked to find that several characters she created in the video game The Sims had developed an interest in the alt-right after loading a Sims save today that she originally made in high school, close sources report.

The life simulation game allows users to fully customize characters and control nearly every aspect of their lives. However, the characters can also advance their own stories even when the user is not playing. Addams had not played The Sims for 7 years, leaving her characters to their own devices in extreme isolation.

“I thought it’d be a pleasant trip down memory lane,” Addams said according to those close her. “I knew the characters would have changed somewhat in that time, but like, a little older, or they had kids or something. The last thing I expected was to see them protesting the removal of confederate monuments from downtown Simsville.”

“I couldn’t understand what exactly they were chanting but every time a minority walked by, a speech bubble with a frowny face popped up—so I kinda got the idea,” she added.

Experts believe that the isolation experienced by Addam’s Sims can result in a warped worldview and boil over into the right-wing terrorism favored by the alt-right.

“Your Sims are trapped in a nine gigabyte bubble, making them perfect candidates for the alt-right,” said Dr. Martin Sterlope, who teaches a course on the psychology of Sims at the University of Cambridge. “If you see anything suspicious, like them visiting r/The_Donald on their in-game computer, or a word bubble that has the Star of David with a red line through it: intervene immediately.”

Addams, however, has not acknowledged that her style of play may be at least partly to blame.

“I failed to get them a good job, leaving them economically destitute. I also deleted all the doors on their home, preventing them from ever going outside and possibly meeting a Sim of color. That couldn’t have helped,” Addams said.

At press time, EA Games, publisher of the Sims, promised to rectify the situation by removing tiki torches from the in-game store.