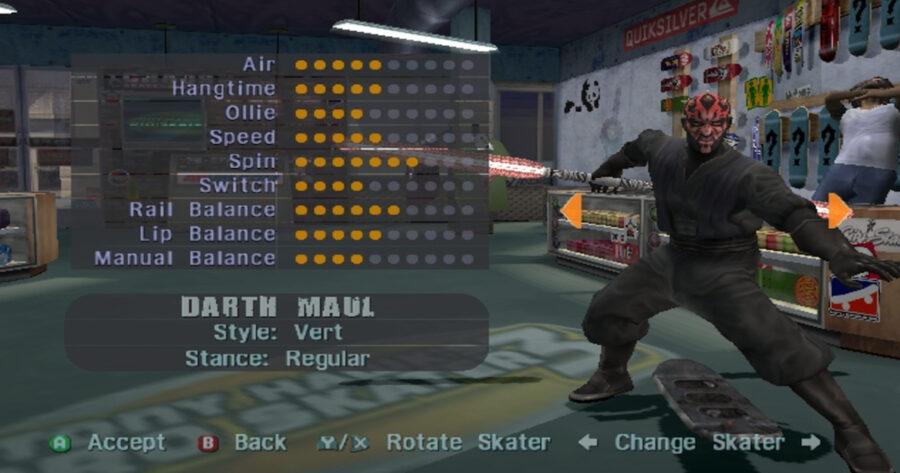 At the dawn of the millennium, Sith Lord Darth Maul made a name for himself as one of the most innovative and original skateboarders of his generation. He invented and perfected moves like the Dark Jedi Grind and inspired countless youngsters to try and force choke the employees of their hometown skate shops.

Nearly two decades later, we sat down with the legendary athlete for an all-access one on one.

Thanks for speaking with us, Maul.

Pleasure to be here.

You’re best known for inventing moves like the Sith Saber Spin, which arguably no other skaters have come close to duplicating. Why do you think your skills have gone unmatched after so many year?

It’s interesting. Guys like Tony [Hawk] did the 900 and all of a sudden a handful of others were doing it. He’s famous for it but dozens of others have been there now. For my case, I think it’s something you’re born with. Nobody handles a lightsaber on four wheels quite like I did. Probably because they don’t have one. Or enough midichlorians (chuckles).

About that! You hit some controversy in the early 2000s for skateboarding with that laser sword.

“Lightsaber.” And sorry to be that guy, but it’s not a laser, per se, it’s more of a tightly looped beam of light (chuckles). But yeah, the lightsaber has been pretty integral in standing out after all these years. There’s never been a rule that you can’t have a lightsaber during skateboarding competitions. Or any other kind of weapon, actually.

Geoff Rowley kept raising hell trying to get it banned, but luckily that never caught on. I think he was jealous.

You were notably close with fellow pros Officer Dick and surfer Kelly Slater. Do you all still hang out?

I still love them, but we mostly keep up through social media now. They helped me a lot after I was cut in half and I really owe them for that.

So what are you up to with skating these days? Is it safe to say your best lines are behind you?

(laughter) Yes, I’d say so! I still pick up my board and skate around an old steel foundry a few times a year, but the sad truth is: folks get old. For those who don’t know, Zabraks only live around 60 years, so I’m up there. I’m trying to focus on being a parent. Also I run the intergalactic crime syndicate known as Crimson Dawn. It’s a challenge balancing my work, life, hobbies, and criminal activities, but I’m just happy to be doing it all while I still can! Also I have metal legs, which makes skateboarding considerably tricky.

She’s more of a musician, which is great. I’ll support her no matter what.

Finally, I’ve just been wondering this for years and I have to ask. Does having all those horns make it hard to wear a helmet?

Very funny. Every interviewer has asked me that since ‘99. Next!