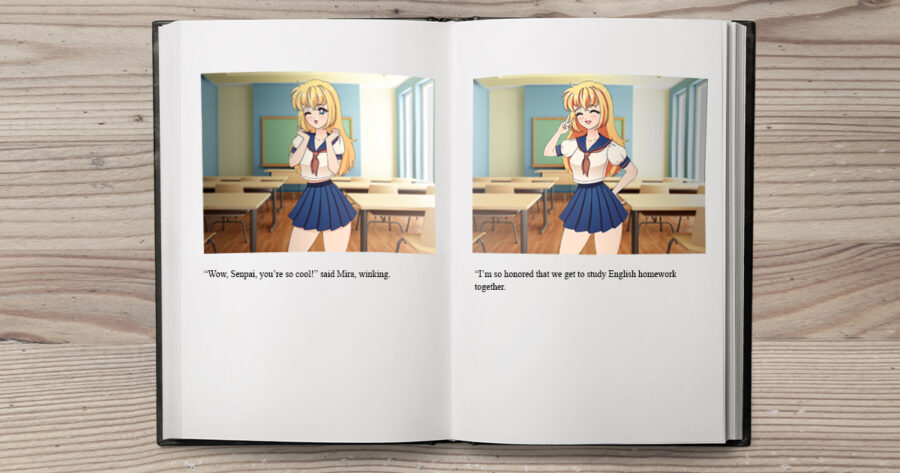 “The Lonely Little Student is, of course, a video game — one where you click through dialogue with a bunch of anime girls who shyly tell you they think you’re kind of cute. But who’s to say a visual novel can’t be a physical novel as well?” Blevins wrote in a blog promoting preorders of the new book. “Basically, I printed a picture of each of the characters with various poses and backgrounds, and wrote out the potential dialogue response underneath each one. It’s kind of like those choose-your-own-adventure books except that it’s way sexier and it’s 18,000 pages long.”

Longtime fans of the series are reportedly excited to purchase the hardcover.

“The Lonely Little Student is one of my favorite video games of all time, and I’m so excited to have it sitting on my bookshelf next to classics like Anna Karenina and Hatoful Boyfriend,” said fan Blanche Truong.

“Sometimes I play visual novels on the train to work and people give me weird looks because I’m a gamer. I’m excited to finally be able to enjoy my favorite works of literature in a way that people respect: in a book,” said another fan, Leon Reed.

“I’m gonna jerk off to this book!” said a third fan, Mark Tanner.

At press time, Blevins revealed that the book would still allow readers to choose their own name, and would come with a sharpie so that they can write it into the blanks left for them.