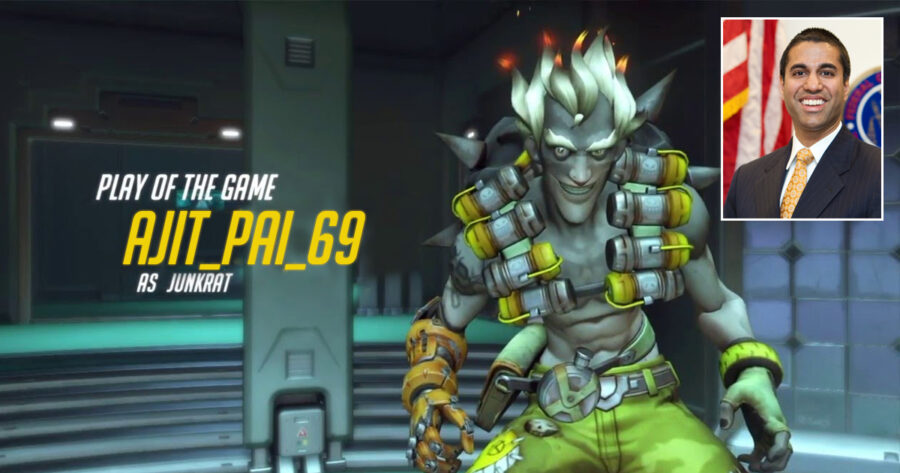 Frustrated gamers initially took to Reddit to discuss the issue before slowly beginning to piece together their theory that Pai implemented the throttling to give himself an unfair advantage.

“My team needed just 5 more seconds in a captured location to win,” said Redditor Jen Allen. “Next thing I know my internet starts lagging like a mother, Doomfist is dead, and we lost the match. It made no sense.”

As more and more gamers came forward, several began to notice unusual similarities in each of the matches.

“A couple of us Reddit sleuths in r/Overwatch figured out that every player who experienced the throttling had two things in common,” said Redditor Glen Klentak. “They were all Verizon internet users, and the throttling only occured in matches featuring a player named Ajit_Pai_69. That can’t be a coincidence.”

Several hours and hundreds of comments later, a mysterious Redditor claiming to work for the FCC confirmed that “Ajit_Pai_69” is Ajit Pai. The source explained that Pai promised Verizon he would repeal Net Neutrality in exchange for the ability to throttle internet speeds of his online opponents at will.

“He’s sucked at gaming all his life. Ajit’s been eating shit ever since his ‘Goldeneye’ days back in college,” the source explained. “So he dedicated his life to becoming FCC chairman to finally get back at everyone who utterly dominated him online.

There’s only so many teabaggings a man can take before he snaps and fucks over the American people,” the source added.