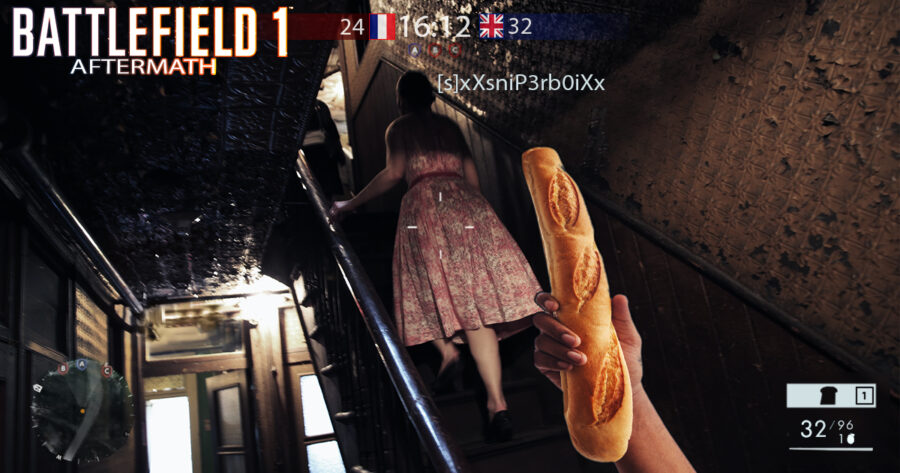 EA announced a surprise addition to the Battlefield franchise in a press release this morning: a new Battlefield 1 game mode modeled after the lives of women married to deceased French soldiers.

“The success of Battlefield in a World War One setting has shown that our audience is hungry for fun multiplayer battles applied to history’s grittiest moments,” reads the press release. “That’s why we’re excited to go even grittier by bringing gamers into the life of a war widow in Battlefield 1: Aftermath.”

The Aftermath DLC pack lets players move directly from a death in the heat of combat to the lives of their now companionless spouse.

“Basically, what happens is if you die on a map like Nivelle Nights, you’ll zoom out onto the map like usual,” said DICE spokeswoman Deborah Klein. “But then, instead of respawning, you’ll zoom over to a suburb of Paris, where a military official is at your front door, confirming the terrible news your anxious wife had already known in her heart for weeks. It’s pretty rad.”

A preview video outlined how up to 64 players will scramble to race other devastated women for bread and milk, and compete in factory labor minigames building weapons, sewing, and even changing bobbins on active machinery.

“Bonus points are awarded at the end if your fatherless son grows up to die defending his homeland at the Maginot Line in May of 1940,” added Klein. “Also, sometimes at the end of the match, a blimp will crash onto your home, because frankly we spent a million dollars developing that tech and we need to keep using it.”

Many organizations have been vocal critics of Aftermath, calling the DLC heartless, trivializing, and offensive. But EA met those challenges head-on with a postscript to the press release, saying, “Look, consumers were clearly willing to let us turn an unromantic war where 17 million men, women, and children needlessly died into a best-selling shooter. It’s fine.”

Sources within EA also hinted at other upcoming Battlefield titles in the same vein, including a return to a more modern setting with Battlefield: Guantanamo where players torture enemies from previous games.