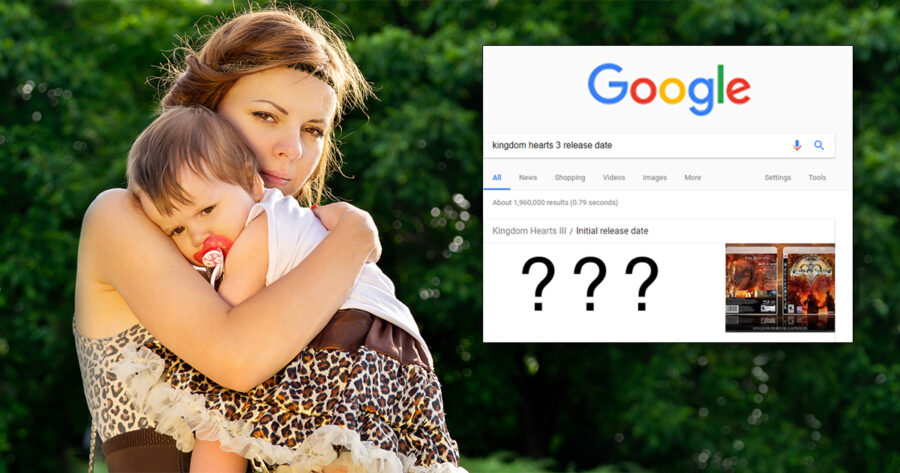 Do you have kids? If you answered yes, then you are a monster. How could you bring children into such a cruel, callous world that doesn’t have Kingdom Hearts III in it?

It’s selfish to introduce a new soul to a planet that is objectively worse than the one you grew up on. Why would you procreate when you know your kids won’t have access to the same quality of Kingdom Hearts games that their parents enjoyed?

We haven’t had a new adventure with Sora, Goofy, and Donald in almost twelve years, and the only Heartless I see around here are the ones who callously spawn life onto a dying Earth despite knowing that fact.

In a world without Kingdom Hearts III, there is only darkness in our futures.

And don’t you dare try to tell me that Chain of Memories came out in 2007, or that Birth By Sleep came out in 2010, or that Dream Drop Distance came out in 2012, because those were all on handhelds and we both know that shit doesn’t count.

Think of all the great Disney movies and Square Enix games that have been released recently. Now realize the tragedy that none of those characters have met each other. No baby would consent to being born into such a forsaken hellscape.

You can’t ask a child if it wants to be born, but if you could it would probably say “Can I go on a magical journey where I team up with Noctis and Moana to save San Fransokyo from the Nobodies?” And you would have to look that unborn baby in the eyes and say “No.”

Can you look your fetus in the eyes and break its unborn heart?

If you’re thinking of starting a family, do your future kids a favor and don’t have them. There’s enough suffering in this world already, because I’ve been in unspeakable agony for the last 15 years waiting to see Sora and Kairi finally kiss.