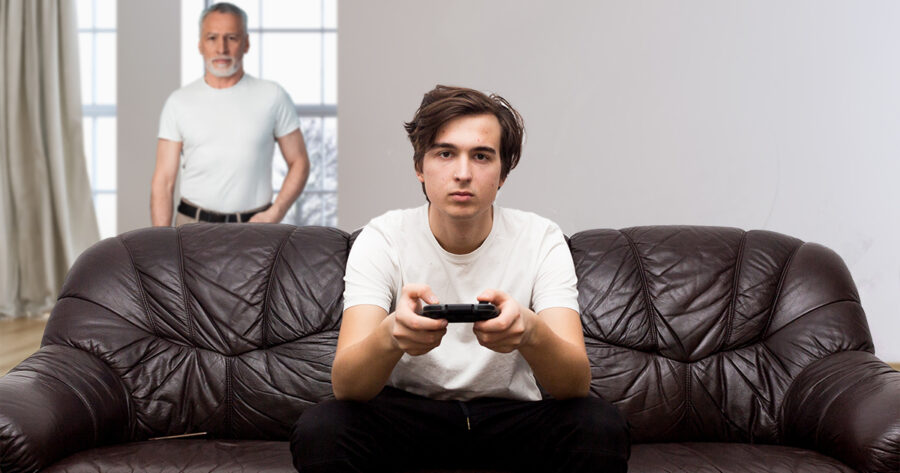 YOUR LIVING ROOM — Late Sunday night in the midst of an otherwise chill evening of winding down from the school week and playing Assassin’s Creed, you became increasingly confused after your dad stopped dead in his tracks in the middle of the living room to stare blankly at your TV screen thinking about God-knows-what for about 15 minutes.

Your dad — who, for a full quarter-hour, has declined either to sit down and relax or keep walking to his bedroom and go to sleep — did not respond to multiple requests for comment from you as to what was on his mind.

“I can’t tell if he’s super entranced by the conflict between the Assassins and the Templars, or if he’s just like zoning out and thinking about work stuff,” you mumbled quietly in the unlikely event your dad was tuned-in enough to be listening. “Maybe he’s thinking about how good graphics are now? ‘Cause they were probably super shitty when he was a kid? Ultimately, I can only speculate — I am 16 and this man is an enigma to me.”

While you have been able to piece together a few clues about your dad’s state of mind — he’s just gotten home after a long day at his job, he’s still wearing his work clothes, he’s holding a large cup from the Taco Bell drive-thru — they aren’t adding up to a coherent narrative that would explain why he’s so diligently watching you perform reconnaissance around the Holy Land.

“I seriously can’t tell if he’s invested in the story, curious about the gameplay, or just using the screen as a place to rest his eyes while his brain wanders off somewhere else,” you exasperatedly admitted. “His facial expression is implying all of those things, and yet none of them at once.”

Your friend Skyler Finley, who spends the night at your house enough that they’re kind of like your dad’s second kid, was equally perplexed about what your dad might be thinking about, and, in any case, how to proceed.

“Would it be weird to offer to let him play?” Finley hesitantly suggested. “Would he even want that? I’m worried that if we pitch that he’ll actually take us up on it. And I have to think that would somehow be more awkward than whatever’s happening right now.”

At press time, your dad picked up the Assassin’s Creed disc case and read the entire description on the back without making any comment or showing any emotion.