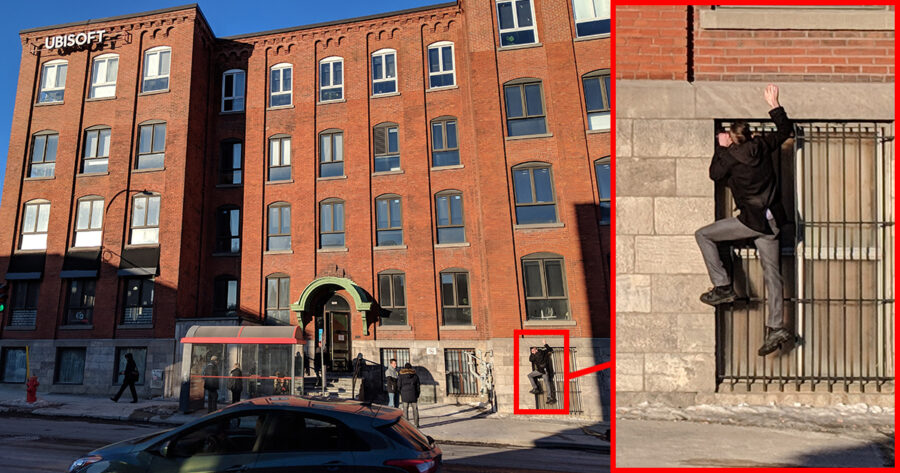 MONTREAL — Brian Jackson, a new Ubisoft employee, was spotted scaling the outside of the company’s building as part of his first day orientation.

“Once I arrived and sat through a twenty-minute monologue from my boss, she handed me a company phone as well as some climbing gear,” Jackson yelled over the whipping winds near the peak of the structure. “Apparently, in order to get my building access, I need to scale the building. I thought about quitting on the spot but I really need that health insurance.”

After getting his building access, Jackson then received workstation access by collecting pages with the individual letters of his user ID strewn around the campus. He reportedly claimed a cubicle by fending off temps for five minutes and also signed up for the company pension plan by scanning for clues using an AR app on the company phone he acquired by giving up his social media logins.

Ubisoft CEO Yves Guillemot explained this unorthodox onboarding process of new hires is to quickly acclimate them to a typical workday at the company.

“Challenging our employees is what makes Ubisoft the best game company in the world,” Guillemont explained to reporters. “In order to become CEO, I had to collect 100 feathers — the scream of birds still haunt my nightmares!”

When asked how long he planned to work for his new employer, Jackson seemed committed to staying for the long haul.

“If I leave, I’ll probably lose all of my progress and have to restart. Best not to risk it.”