TV Remote Batteries Called up to the Big Leagues 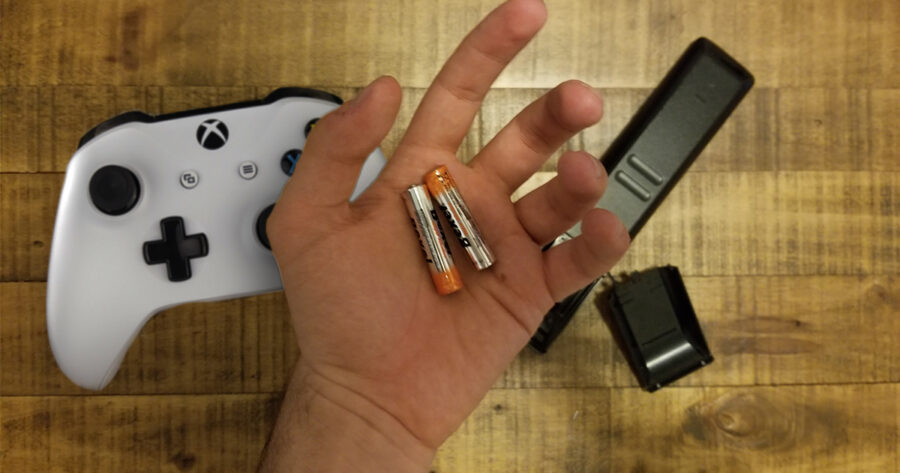 ANAHEIM, Calif. — A promising pair of AA Bexels were promoted to work in an Xbox One controller after a successful several-month tenure powering a Toshiba television remote, today.

The managerial decision made by local gamer Shawn Ramirez finally resolved days of speculation from analysts about how he would handle the continual low-battery warnings.

“In this household we like to reward hard work and those AAs have done everything I asked. Now it is time to see if they can handle The Show,” the 22-year-old gamer purportedly said before the eyebrow-raising recruitment.

When questioned on the boldness of the pick and how fans might react, Ramirez said, “Just because I was just too lazy to go downstairs and grab some new batteries doesn’t mean I think these guys aren’t capable of getting the job done.”

“Though to be honest a big factor was I didn’t want to risk getting booted from the solid Battlefield 1 lobby I was in,” he added.

Sources close to Ramirez, however, were eager to express their opinions. “Holy shit, I can’t believe it,” said James Packard, aka SurfinShaman15, who was in Ramirez’s Battlefield 1 squad during the seismic battery switch.

“He had mentioned that his controller batteries were dying, but wow,” Packard added. “These AA batteries are coming from a foreign league, skipping the AAA league, and going straight to the majors—who could believe he’d make a ballsy pick like that? I dig it.”

Among those displeased by the call was Ramirez’s own girlfriend, 23-year-old and fellow gamer Kayla Hopland, who frequently watches TV in his room. “Do you think he’s going to ever bother bringing up an extra pair of batteries to replace the ones he took?” she opined. “Of course not. This is why I have a goddamn chargeable controller at my house. These kind of short term fixes eventually catch up to you.”

Early reports indicate that the AA Bexels’ time in the Xbox spotlight might be limited after all, as Ramirez is rumored to be eyeing a pair of mismatched AAs residing in his desk drawer.