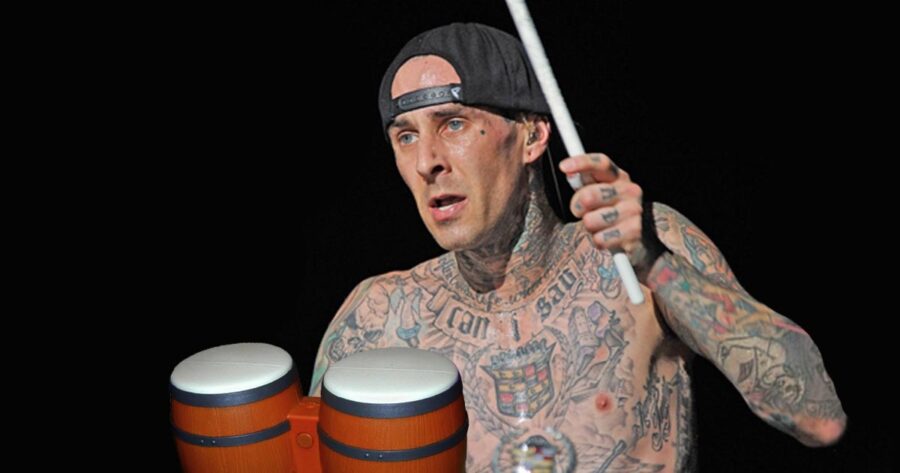 LOS ANGELES — Blink 182 drummer Travis Barker has lit the video game world on fire by posting a video of him just absolutely fucking shit up on the drums originally packaged with the GameCube game Donkey Konga.

“Holy shit, that guy can do anything,” said Tobias Villa, a longtime Barker fan who watched the video. “I’ve seen him shred on small kits before, but this was a whole other level. Two little drums, no cymbals, no frills, just pure drumming excellence. At one point he threw his sticks away and was just playing with his hands. Dude’s a fucking animal!”

Barker said that at first he didn’t even realize what he was playing on a peripheral originally intended solely for use in a Nintendo game from 2004.

“Oh fuck, I just saw a couple of drums and did my thing — beat the shit out of them for an hour,” said Barker when told of the nature of the drumset. “I thought it was weird that they were bongos with such terrible acoustics. Oh, that explains the Gamecube cord hanging off of them, too. And the ‘DK’ sticker. Honestly, I thought that was a Dead Kennedys thing. They sounded great though!”

“I remember coming into the studio one day,” said Matt Skiba, guitar player for Blink 182. “And there’s Travis going to town on a set of Rock Band drums. I thought he had hooked the game up and I was so excited! When I asked what system he was playing on he just looked at me, and that’s when I knew: he was actually tracking drums for our Neighborhoods album. Fucking insane, dude. Also, probably should’ve used real drums. Oh well.”

As of press time, Parappa the Rapper had released a remix of his breakout hit ‘Chop Chop Master Onion’s Rap’ featuring Barker on the Donkey Kong drums.