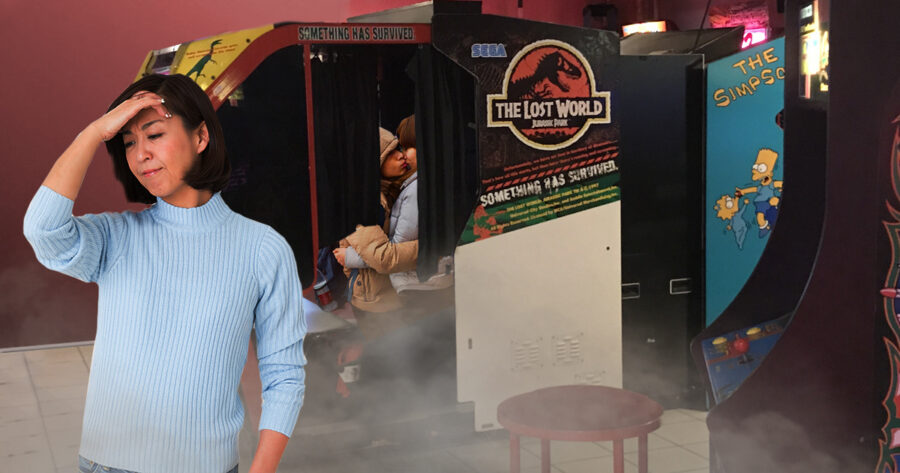 SEATTLE — Two sexually adventurous teenagers were reportedly trapped in the Jurassic Park arcade machine they’d been fooling around in today, fearing any movements would alert a nearby family members to their presence, according to sources at the scene.

Freshman sweethearts Braedon Sandoval and Michaela Brown were at a birthday party being held for Brown’s younger brother at Round Table Pizza when they snuck away from the festivities for an intimate encounter in the driving title’s SUV inspired cabinet.

“We were going at it when suddenly I noticed ripples in the cup of Fanta I’d set on the dashboard,” said Brown when pressed for comment after the incident. “I recognized the footsteps; that was my mother. I was terrified. I wanted to run out of there, but Braedon held me tight and said ‘She can’t see us if we don’t move.’”

Eventually she wandered away, her heavy footsteps serving as a constant reminder that she is out there somewhere.

“We knew if we waited long enough Michaela’s mom would go back for some garlic bread or another Diet Coke,” said Sandoval. “We were so preoccupied with whether we could dry hump in the Jurassic Park machine, we never stopped to think if we should.”

An hour after their disappearance, Mrs. Brown had given up the search. “Clever girl,” she said of her dry humping daughter, “I knew she would be a handful ever since she was conceived in that Daytona 500 machine.”