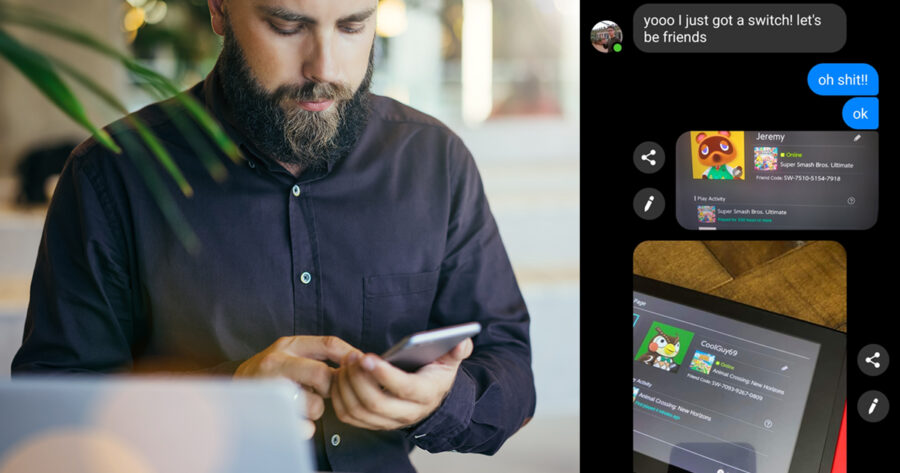 TOLEDO, Ohio — A pair of Nintendo Switch owners have entered day seven of a stand-off over who will be the first to send the other a friend request, as each waits for the other to cave in and type in their friend code first.

The impasse began when Jeremy Crooks bought a Nintendo Switch Lite to play Animal Crossing with his friends. Crooks immediately texted his best friend Alexa Wagner his Switch friend code, expecting that she would send him a friend request. Instead, Wagner simply responded to the text by sending her own friend code, leaving the two at a stalemate.

“I’m really excited that Jeremy finally got a Switch and we can hang out in Animal Crossing even though we live on opposite ends of the country,” Wagner explained. “But it’s just a lot to ask me to open my profile and type in a whole 12-digit code. He really should put the effort in if he values our friendship that much.”

By day three, the situation became more passive aggressive, as Crooks began tweeting photos of cool items in his Animal Crossing shops. When Wagner replied that she wanted some of the furniture on sale, Crooks tweeted, “Sure! I’ll open my town gates. Are we friends on Switch yet?” Wagner did not respond.

Frustrated that he hadn’t gained a single Switch friend in his first week, Crooks later posted his friend code on Facebook and asked all his friends to add him. Within minutes, he received 50 replies, all from people responding with their own friend codes instead of adding him.

“I don’t get why it’s so hard for people to just type in a short string of numbers,” Crooks complained. “I mean, I would totally do it myself if Nintendo would just use usernames like everyone else. But I just have a lot going on right now, you know?”

After seven days, the two finally came to a resolution, agreeing that the first person to go online next would add the other. However, both reportedly disconnected their Switch from WiFi as the conversation was happening.