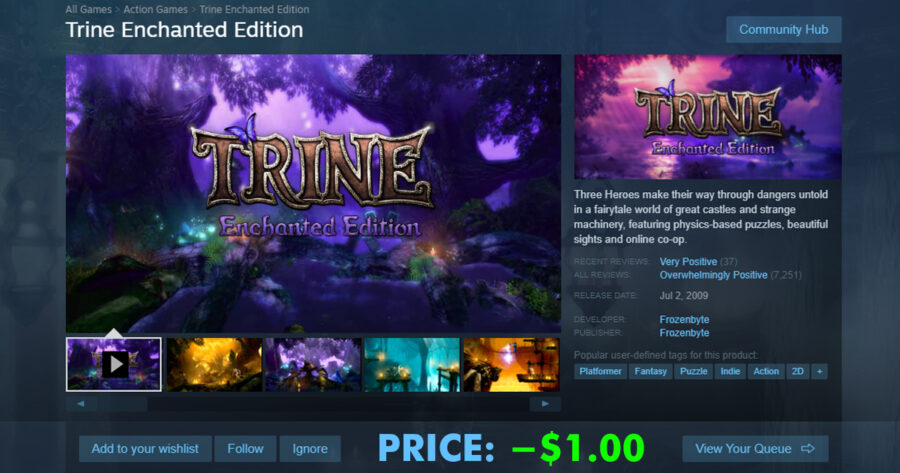 Popular software distribution platform Steam has announced one of its most innovative flash sales to date. This weekend only, users will receive one American dollar in exchange for downloading the 2009 medieval puzzle platform game Trine: Enchanted Edition.

“Sure, I know Trine,” said local gamer Gabe Wollard. “I’ve got in my library already, so I can’t take advantage of this weird deal, though. I bought it for twenty-seven cents during their spring sale a few years ago. I remember playing it with my girlfriend a few times. It was kind of fun.”

Debuting in 2009 on Windows and eventually making its way to every modern console and operating system, Trine was received favorably and spawned several sequels, including a recently announced fourth entry in the series. The second and third titles have been made available for free during the current Steam sale, after which they will go to their normal price of being on sale for $2.99.

“I’m so glad Trine has continued to live on and endure in today’s crowded gaming market,” said Jukka Kokkonen, the senior programmer of Frozenbyte, developers of the series. “Even if it is just as some game that’s always on sale, it’s still been great exposure. We really wanted a way to give back to the fans, so we thought, what about our best sale price yet? Let’s give them a dollar!”

When asked about the upcoming newest entry to the franchise, Kokkonen didn’t offer much in the way of insights, but slyly hinted that we would all be able to see for ourselves soon enough, most likely on sale.

Steam customers have until next weekend to put the game in their cart and “purchase” it, at which point the PayPal account associated with their Steam account will be credited one dollar. Other highlights of the sale include several titles you just paid full price for, and a collection featuring every single game Sonic’s ever been in for four dollars.