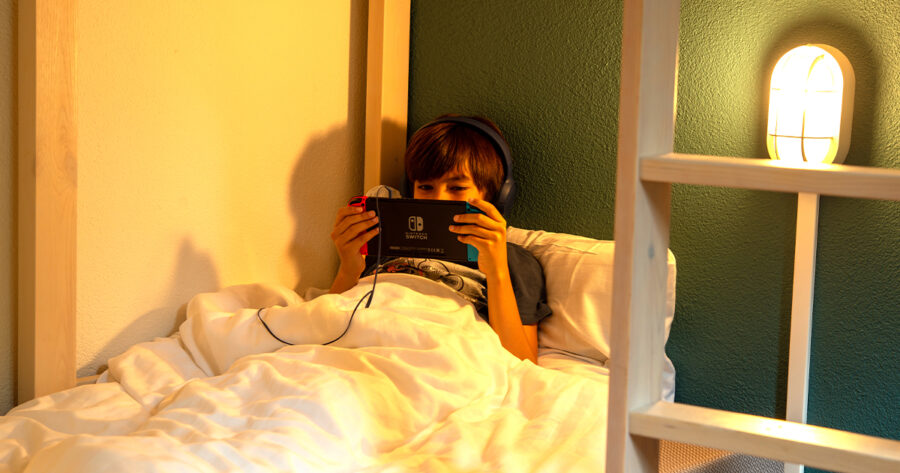 LOS ANGELES — After a long hard day of gaming, Thomas Ruiz decided to wind down by playing his Nintendo Switch for three more hours before going to sleep, according to sources.

“Man, what a long day,” said Ruiz, inspecting his tired reflection in the dim Switch screen before picking a game to dig into. “After my morning Cinnamon Toast Crunch, I watched four hours of IGN gaming news videos. Then I got hungry, so I made a cheese quesadilla for lunch. Then six hours of Apex Legends, another cheese quesadilla snack, followed by four hours of Guilty Gear Strive. Time to relax and play Puyo Puyo Tetris until I pass out and then do it all again tomorrow.”

Sleep expert Dr. Danica Wan says that too much screen time can have long-term health impacts.

“People come to me with sleep problems, and the first thing I tell them is to put their electronics outside their room an hour before bed, but no one ever actually does that,” said Wan. “Not even me. Look, I get it. Nobody wants to be alone with their thoughts. How else are people supposed to drown out the horrible voices in their heads without constant stimulation? It’s hard to unplug, but that’s why it’s important to game really hard during the day so you don’t prolong the issue into evening hours. I really recommend Slay the Spire, that shit is so addictive that I play it all day long and then crash-land into bed.”

Ruiz’s girlfriend Hotaru Ren said that his late night Switch gaming has definitely affected the quality of their relationship.

“I work a morning shift and I support both of us,” said Ren. “The lights and sounds from the Switch keep me up, not to mention the grunts Thomas makes when he gets 3-stocked in Super Smash Bros. while this dumbass wakes up at noon. I know that Thomas is clearly going through something right now, and that he’s medicating with video games, but something’s gotta give. Aren’t there any narrative video games about shitty boyfriends that he can binge that might help that message get through to him?”

At press time, Ruiz promised he would try to fix his sleeping habits by signing up for a Final Fantasy XIV account and giving up sleep entirely.