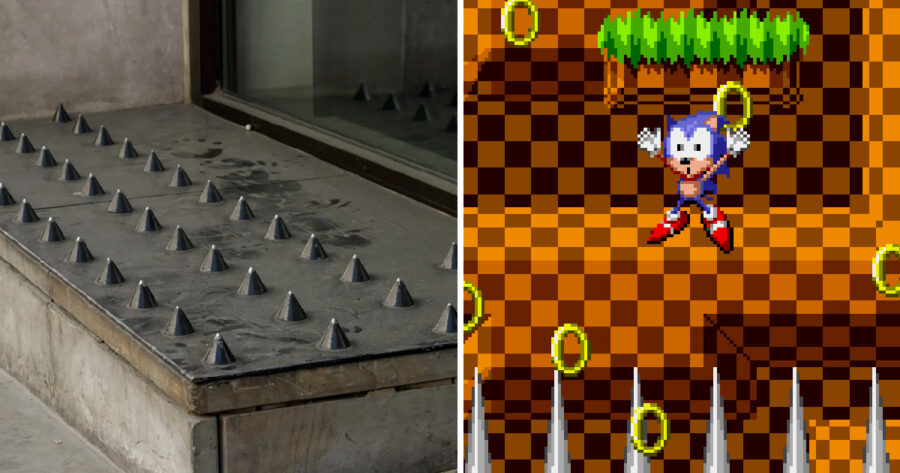 SAN FRANCISCO — The city of San Francisco has installed spikes in public spaces and on buildings in order to discourage camping from homeless people as well as adventuring from Sonic the Hedgehog.

“Sleeping homeless people regularly block the sidewalks and the streets are all scratched from Sonic constantly riding his snowboard downhill,” explained City Councilwoman Lori Perez. “These spikes will reduce those incidences while posing no danger to the average San Franciscan, provided they’re carrying a suitable number of rings and can pick them up quickly if dropped.”

The move to install spikes, however, comes as a shock to many of the city’s homeless population.

Sonic the Hedgehog, who held a press conference to weigh in on the new policy, also expressed dismay.

“The first time I saw spikes in the city, I thought Robotnik was up to his old tricks again,” Sonic said. “I was horrified when I discovered it was my own neighbors in San Francisco who did this. Let me be absolutely clear: cities changing their architecture to be hostile toward their own people is way past lame.”

“I mean, I get why they’re installing spikes to stop me,” Sonic added. “I took out two streetcars last time I spin dashed down Lombard. But homeless people trying to get some rest? Just leave them be!”

At press time, protest groups organized marches in response to the San Francisco Police Department’s announcement that they would start responding to calls involving homeless encampments utilizing their new fleet of hovercrafts with wrecking balls.