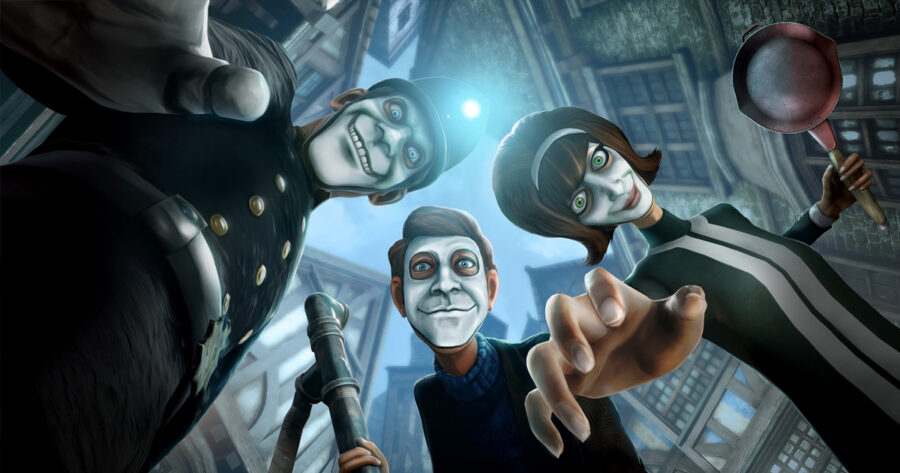 In the latest creation from the Montreal-based developer Compulsion Games, We Happy Few is a wonderful game layered in moral ambiguity that asks players the hard questions, such as: “How long are you willing to pretend you haven’t already seen all of these concepts in 2007’s hit series BioShock?”

While the narrative is going to be what keep players engaged throughout their playthrough, the most striking element of We Happy Few is undoubtedly its brilliant visual aesthetic. Drawing from the architecture and art deco stylings of 1960’s Britain, and the art deco stylings of 2007’s first person shooters, We Happy Few‘s art design is a visual beauty to behold.

The universe’s history is told piecemeal through carefully placed environmental details. Whether you’re scrolling through the medical records of the earliest consumers of the Joy medication or glimpsing at propaganda from the game’s alternate version of WWII, Compulsion Games has built a captivating engine bound to be considered one of the most original games players have ever experienced, as long as they live in an alternate reality where they haven’t already had those experiences eleven years ago.

In an interview with Gamasutra, Compulsion Games founder Guillaume Provost explained that the ultimate goal of the game was to “Force people to challenge their own perceptions of the world. In a world full of uncertainty and fake news, people need to ask themselves if BioShock really existed and admit that if BioShock isn’t a real game, then We Happy Few is really pretty innovative.”

Isolated in the small chain of dystopian islands of We Happy Few, the game’s brilliant character design and gameplay came to life for me as I isolated my mind from a time I spent in the isolated dystopian world of Rapture. The brilliance of We Happy Few comes from placing players in their very own dystopia of the mind, a place where the beloved BioShock series does not exist, and instead, We Happy Few does.

I found myself enthralled by We Happy Few’s four-dimensional gameplay, forcing me to reckon with an alternate reality version of myself who had not already spent hundreds of hours playing the BioShock series.