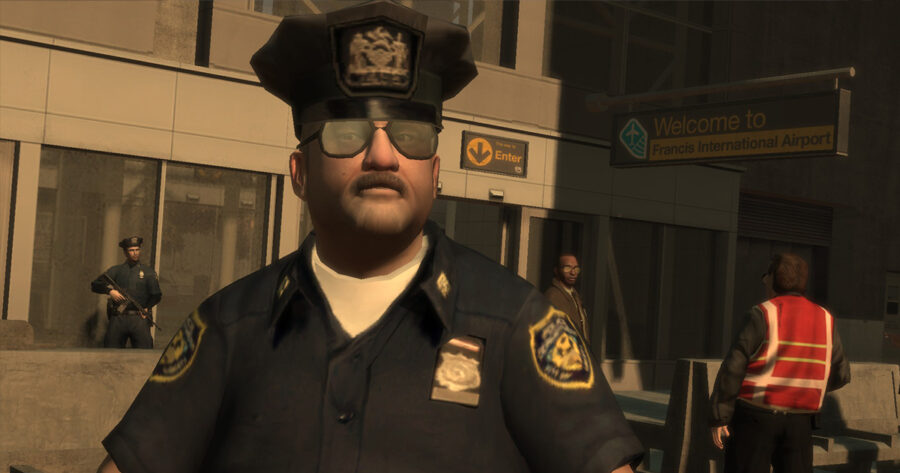 LIBERTY CITY — Liberty City citizens were shocked and dismayed to learn that over 39,000 officers of the 40,000-strong LCPD live outside the scrolling area of the map.

“I just can’t believe it,” said Algonquin resident Nancy Leopold. “I could understand if we were talking about the Alderney State Police. But the LCPD? Our Boys in Blue?”

Recruitment within the city limits has been ineffective, despite heavy “Join the LCPD” marketing signage at many well-known locations.

When asked to comment on the situation, Tom Pireni, Liberty City Police Commissioner for Public Affairs, issued a statement: “We are incredibly proud of our soldiers… um, I mean officers, and embrace their choice of residence. Whether they live 45 minutes west of the Hickey Bridge, or an hour south of the Booth Tunnel, our heroes are ready to enforce justice for the mostly-white, wealthy citizens of Algonquin island. Plus the other boroughs.”

As for accepting female recruits — a long-standing request — Pireni’s statement was largely dismissive: “With two body types and four colors of officer, our commitment to diversity is as strong as can be.”

“Police have a duty to serve and protect us. How can they build community trust if they can’t relate to our lives? Do they understand the complexities that face us under the Albanian Mob, the Russian Mob, the Italian Mob, the Jewish Mob and the Triads?” she asked at a recent protest. “Not to mention our civil liberties under assault by the FIB and NOOSE? Last week, I heard someone stole a helicopter in broad daylight, flew to the Statue of Happiness and started a shoot-out. They killed hundreds!”

Pausing to reflect, Humboldt shrugged and admitted, “Well, actually they may have a point, staying the hell out of here.”