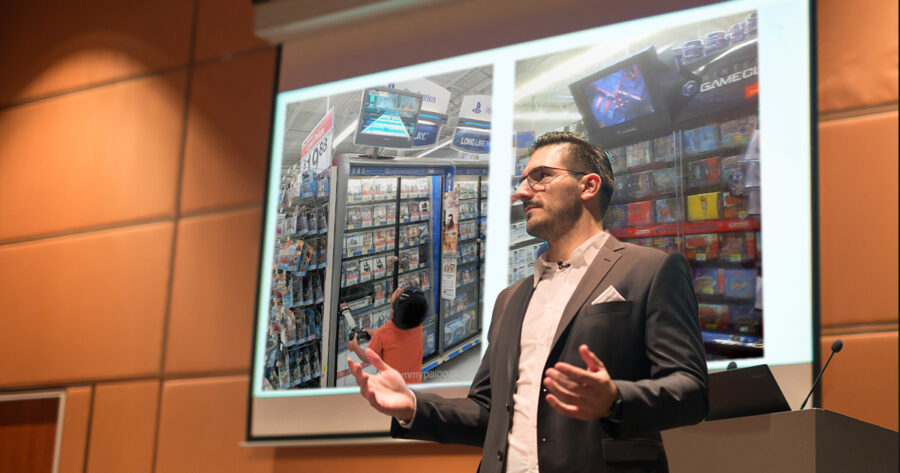 WASHINGTON – After calling an unexpected emergency press conference, the United States Surgeon General announced today that 90% of millennials have developed a dangerous condition referred to as ‘Kiosk Neck,’ a condition where adults are unable to keep their heads at an even level due to playing kiosk video games at stores like Walmart in their youth.

“This epidemic was almost certainly caused by a flagrant lack of functional awareness on the part of mid 90’s and early 2000’s game stores,” said Doctor Jerome Adams, with several anatomical diagrams of bent necks flanking either side of the podium. “Children left in malls unaccompanied flocked to the PlayStation and Nintendo 64 kiosks in order to play games that their parents deemed too violent, but to do so they were forced to crane their necks at roughly a 75-degree angle to see the monitor effectively.”

The lasting effects of this condition are as of now unknown, though anecdotally many claim it has taken an extreme toll on several aspects of their lives. Drake Uho, a content manager for a retail chain, complained that Kiosk Neck has put his employment and marriage in jeopardy.

“I stare at a computer all day organizing our company’s digital assets,” he said. “But it has gotten to the point where I was forced to hang my monitor 6 feet above my head off the exposed rafters in order to get any work done. I have to drink my morning coffee through a comically long straw and my coworkers constantly make fun of me for it. And don’t even get me started on my husband who thinks I’m repeatedly ignoring him because I physically can’t make eye contact when we talk. Yeah it was great getting to play Mortal Kombat and Manhunt as a kid without my parents grounding me, but at what cost?”

The Surgeon General closed the press conference with a commendation to GameStop for their tireless work in making kiosk screens lower and more accessible to the next generation of youth looking to get their fix of ultra-violence on the sly.