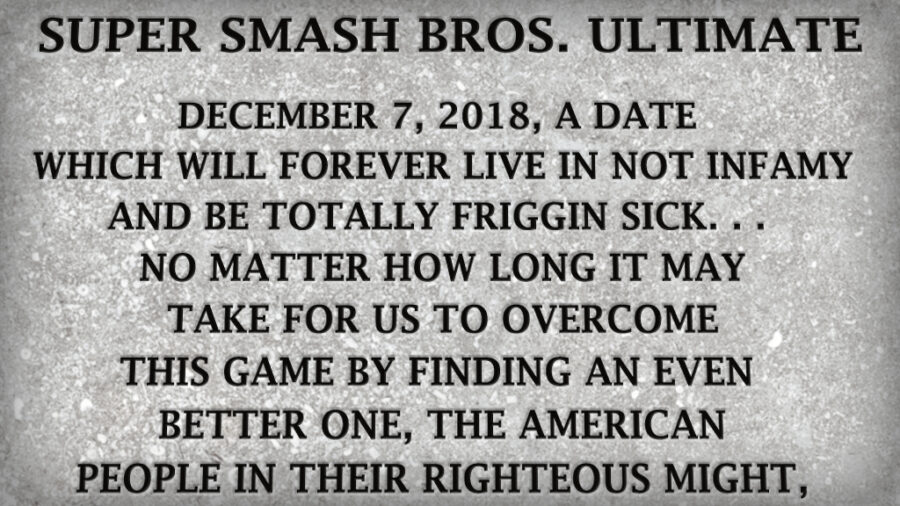 HONOLULU, Hawaii — Super Smash Bros. Ultimate for the Nintendo Switch was released today, the latest installment in the long-running fighting game series and the first in three years, marking the most eventful December 7th in history.

“We were taken by complete surprise, somehow our online pre-order system completely missed this amount of customers coming to our store,” said Tyler Kimmel, manager of a local GameStop. “I was napping in the backroom when I suddenly heard a cacophony of engines outside and my coworker yelling that it was an all-out assault at the register and to get to my station.”

The army of fans that appeared early in the morning included people of all ages, a testament to the game’s varied fandom. Among the adults and kids were even some elderly people cosplaying as Solid Snake — one of the game’s seventy-seven playable characters — by wearing vintage military uniforms.

Supply was not able to keep up with demand, leaving some empty handed at the end of the day.

“If we didn’t have to go to that damn memorial service I’d be playing Smash right now,” said Chris Rosenkrantz, a frustrated gamer. “How could they not have been prepared? All the evidence was pointing to this game blowing up sales records and Japan’s history speaks for itself.”

Rosenkrantz went on to call December 7th “a date which will live in not infamy,” before walking over to a Best Buy to get an SD card so he can download a digital copy through the eShop.

Gamers in the area are already comparing the events of this historic day to the tragic events of September 11th, 2001, when Propeller Arena for the Dreamcast was cancelled.