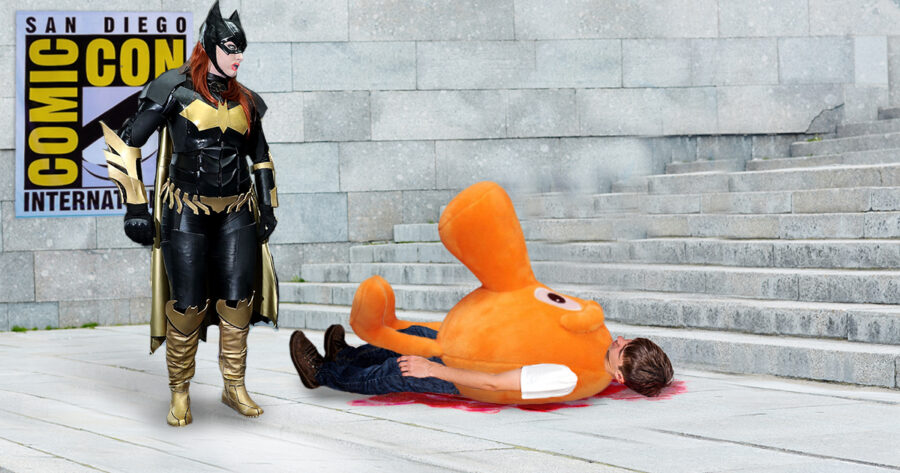 Witnesses paint a terrifying picture of the events. “This Q*bert guy was just flying down the stairs,” said attendee Karl Southerland. “At first I thought it was a little YouTube skit or something, and I yelled ‘watch out for coily’ and some other references to show my support. When he landed at the bottom, everyone clapped.”

“Now I realize I was mocking a dead man,” Southerland added.

The deceased Q*bert fan, whose name is being withheld until his family is informed, was pronounced dead by a pathologist dressed as Dr. Mario, also in town for the popular event.

Authorities are still working out what caused the fatal fall. “My guess is he just couldn’t see well in the costume,” said a representative of the San Diego Police Department. “Maybe he was distracted by a woman in an impeccable Chun-Li costume and lost his footing.”

“Either that or some kind of Heath Ledger scenario where he became dangerously invested in the role of an arcade character whose only motivation is jumping up and down stairs. Everything’s on the table”

This is not the first time death has graced the halls of Comic Con. Back in 2008, 31-year-old Harold White was found in the facility’s ventilation weeks after the event’s close. He was dressed as John McClane.

Convention events are scheduled to go along as planned, but what should have been a fun vacation remains a nightmare for those who witnessed the horrific fall. “I don’t know what to do,” said a tearful Southerland. “All I can think about is when he landed with a thud, and let out his last words: “@!#[email protected]!”