Psychiatrist Asks Streamer If Chat Is in the Room Right Now 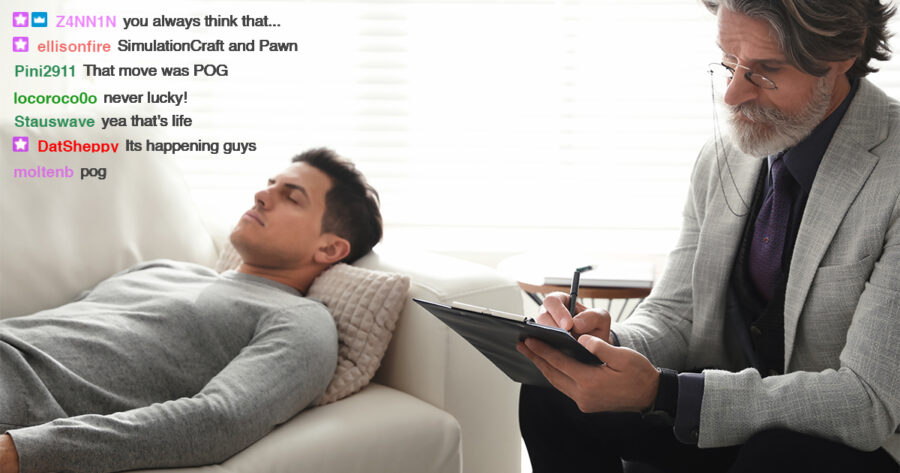 SANTA CRUZ, Calif. — During a session with a Twitch streamer, psychiatrist Dr. Stephen Gibbons asked the patient if this nebulous “Chat” was present in the room at that very moment.

“Chat’s actually poppin’ off right now,” said the anonymous patient, according to a transcript from Dr. Gibbons’ research. “They want to know what settings you’re running.”

The transcript shows that the doctor, apparently confused, began to describe the recording device he was using to log the session.

Through sessions with dozens of patients, Dr. Gibbons has uncovered a complex relationship between streamers and the Chat. This mysterious entity can be either helpful, harassing, or even “dead.” The streamer often believes its state is tied to their current actions.

“Chat gets LIT AF when I’m on a solid Apex killstreak,” one patient explained, “but sometimes they can get really harsh if I fumble an easy kill. Or if I forget to thank one of them for subscribing. Or if I talk about my boyfriend. Or, like, mention he exists.”

In his research, Dr. Gibbons concluded that many patients felt compelled to satisfy Chat by “streaming” more often and for longer hours, and in extreme cases, they could even feel a compulsive urge to make purchases based on Chat’s whims.

“I had one patient explain that if Chat finds out that they don’t have something called a ‘Battle Pass,’ sometimes known as a ‘Season Pass,’ the Chat will move on to someone that does,” wrote Dr. Gibbons in his notes. “While it would seem that being passed over by Chat would save them quite a bit of grief and misery, patients remain eager to win Chat’s affection.”

In addition to published research, Dr. Gibbons also reported his findings to the public daily through Instagram stories, Fleets, exclusive Patreon posts and other outlets.

“Man, listen to this guy,” he said in a recent TikTok post, which showed a patient crying about their divorce. “This shit is so wild.”