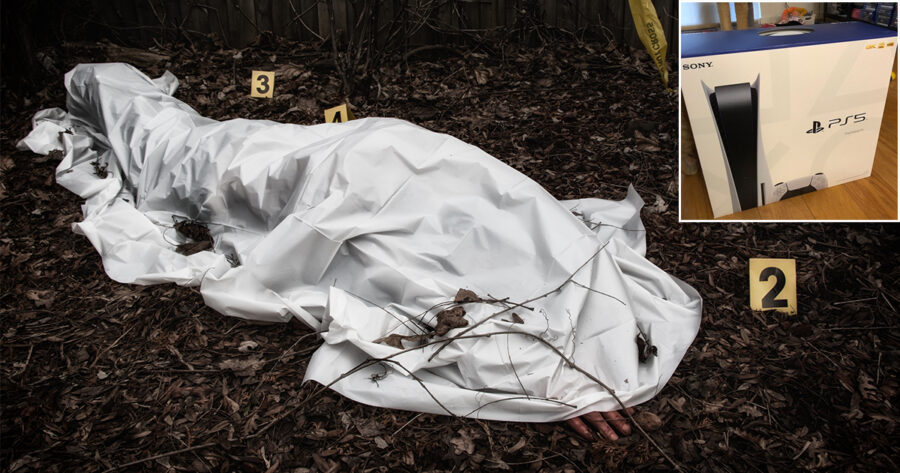 WHEATON, Ill. — Local and state authorities are in a desperate search for a local father who jokingly put socks in an empty PlayStation 5 box and gave it to his son as a gag Christmas present, sources close to the family confirm.

“At around approximately 7 a.m. on Christmas morning one Nicholas Ford abruptly vanished from his home and has not been heard from since,” Chief of Police Sabrina Henderson said in a press conference. “According to witnesses, Ford’s teenage son Clay opened the gag gift and became overwhelmed with joy before discovering the true contents of the gift. Clay asked to speak with his father in the kitchen and Nicholas seems to have vanished. We are hopeful but this is more of a recovery mission than a rescue.”

The family was worried about Ford’s disappearance but seemed to understand why it happened.

“Christopher got the box from one of his co-workers and thought it would be hysterical to play a little trick on Clay,” Ford’s wife Cathy said while sweeping up the ashes of the box after her son reportedly lit it on fire. “I warned him not to do it, so really whatever may have happened to him was his own fault. I just hope he made the smart decision to change his name and skip town. Clay was just getting over when his father gave him a GameStop gift card with a zero balance for his birthday and Clay punched his father in the throat.”

Experts seem to agree that gag gifts at Christmas are not always the wisest decision.

“Every year there are a handful of injuries as a result of a parent messing with their children at Christmas,” retail expert Dora Gardner explained. “Keys to a car that doesn’t exist, a book in a laptop case, batteries to nothing. Small gifts in oversized boxes, misleading wrapping paper, or pun gifts; these are all bad ideas and we recommend against it unless you want to wake up naked in the desert.”

As of press time, authorities have considered charging Nicholas Ford with a hate crime for his action, if and when he is found alive.