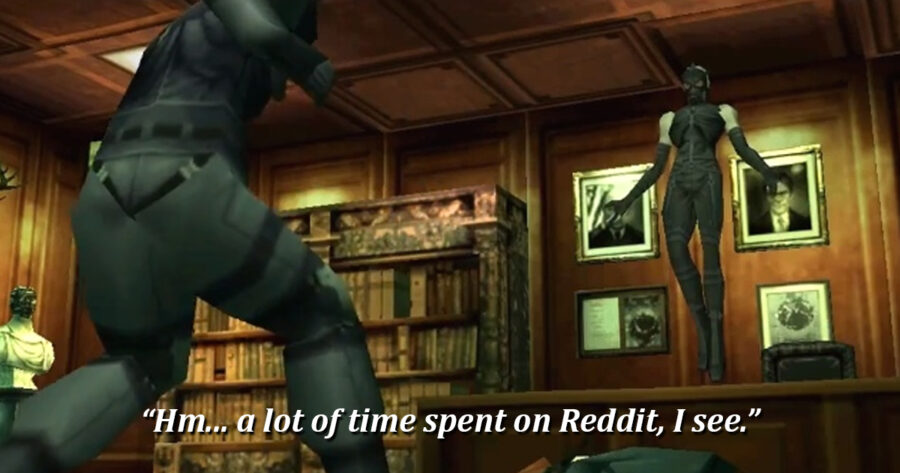 An early hands on experience with the upcoming Playstation Classic has revealed a change to one of the system’s most legendary titles: in his iconic confrontation with Solid Snake in Metal Gear Solid, Psycho Mantis now observes and comments on trends visible in the user’s internet history.

“We tried our best to recreate the experience of playing these games on the original Playstation as best as we could,” said Sony Interactive Entertainment president John Kodera. “But since we don’t have memory cards in the hardware, Psycho Mantis is no longer able to deliver dialogue based on what other Konami game save files may have been contained on it.”

Taking a cue from recent advances in smart home technology, Kodera and the team at Sony decided to modernize the battle scene, and have the Psycho Mantis character use his abilities to access the browser history of the closest wi-fi network to the system.

“I see you have a ssstep sister,” said Psycho Mantis in a demonstration of the modified scene, misinterpreting a series of pornographic queries. “And you’ve been visiting Info Warssss lately. Alex Jones deservessss a platform, if you ask me. Oh, and I’m sorry you wasted your first round draft pick on Le’Veon Bell.”

The announcement of the modernization of the classic scene did not sit well with many outspoken gamers.

“That’s ridiculous,” said Tyler Barry, a longtime fan that was upset to hear the news. “If the dramatic boss fight doesn’t have an awkward interlude where the guy with mind powers starts talking to the spy about Castlevania, then it’s not truly Metal Gear Solid. Boycotting this.”

Additionally, the lack of vibrating functionality in the Playstation Classic’s controller has also forced the exclusion of the sequence where Psycho Mantis demonstrates his telekinesis by moving the player’s dormant controller around on the floor. Kodera refused to reveal what, if anything, may go in its place, simply giving a cryptic warning to users with Roombas to “Hold on to their hats.”

In addition to the controversial change to Metal Gear Solid, several other games have reportedly received updates for the upcoming Playstation Classic release, including a modernized look for PaRappa the SoundCloud Rapper, and functional controls to the original Resident Evil.