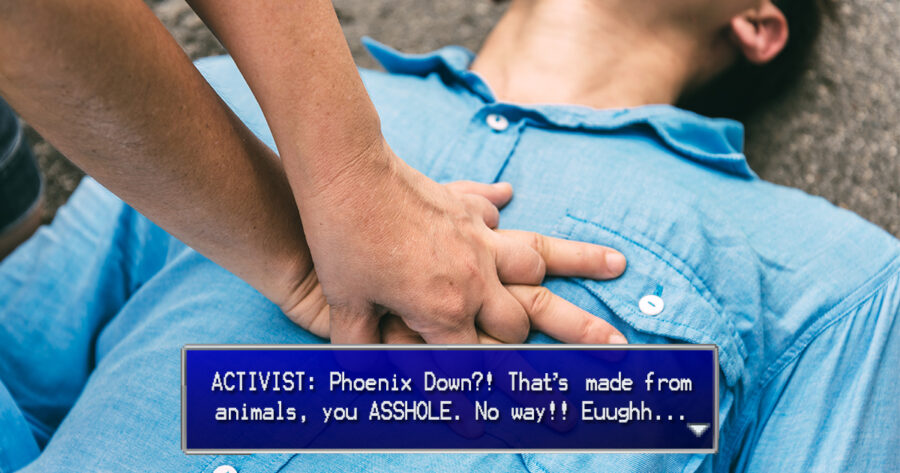 EL PASO, Texas — Local PETA activist Trygil Hellfist passed away today after forbidding his party members from using a Phoenix Down to revive him. The party was attempting to take down a Cactuar when Hellfist suffered fatal wounds.

“He used his last breaths to say that a potion made from an animal would be against his beliefs,” explained Arnid Valor, the party’s healer. “I tried to tell him it’s made from just a feather, not Phoenix blood or anything like that, but he wouldn’t budge.”

Phoenix Down, a concoction commonly used to revive the fallen, are in fact made using a down feather of a phoenix. These are extracted painlessly from a phoenix, and the use of the potion to some is honoring the powerful bird.

Hellfist’s death will be felt by many. According to an ancient prophecy, Hellfist was the “chosen one,” the only hero capable of saving the world from some yet unknown doom. “By staying alive, he could have fulfilled his destiny and saved thousands of souls,” Valor shrugged and added, “but he said if the cost is continued animal cruelty, that is not a world worth saving.”

When asked why the party was engaging a Cactuar, a seemingly peaceful creature until provoked – an act that would seem to directly go against PETA’s message – Valor quoted Hellfire directly: “It’s a plant, not an animal. Fuck plants.”

According to friends, Hellfist was a passionate defender of animal rights, refusing to eat any meat even on long quests. He shunned leather armor, instead opting for a hemp doublet — a choice that may have played a role in his untimely demise due to its meager +3 DEF. Hellfist was most famous for heading up PETA’s campaign against riding chocobos, called “Don’t Ride A Chocobo, Ride A Pretty Dragoon Instead,” which many have critiqued as sexist and offensive.

With Valor too low a level to cast Raise, Hellfist is left waiting for a passing mage kind enough to revive him. At the time of publication, his body is still in the desert, occasionally getting run over by travelers on Chocobos.