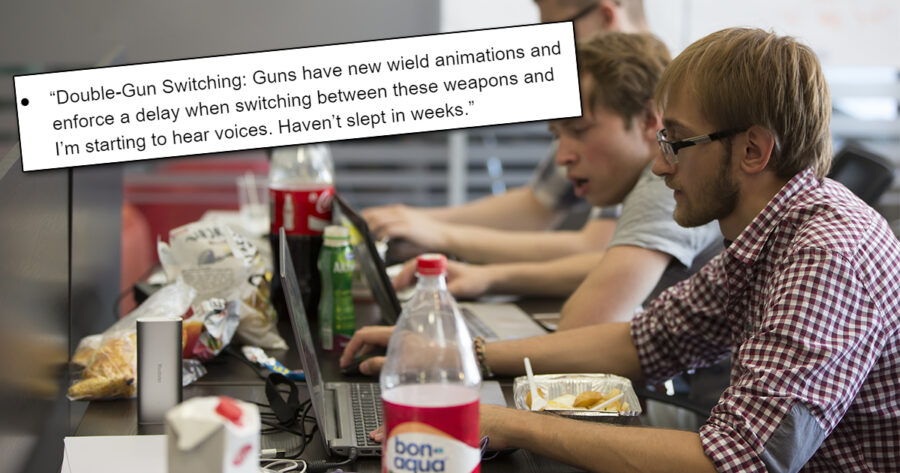 TWYCROSS, U.K. — The latest patch notes for Sea of Thieves are available this week, featuring details about weapon rebalancing, stability improvements, and the ongoing mental deterioration of one of Rare’s programmers, Ed McLarey.

Players who have asked for the double gun problem to be addressed should be satisfied with the latest round of patching, but those gamers who are close to McLarey may not like what they find. The patch notes included the following:

“Double-Gun Switching: Guns have new wield animations and enforce a delay when switching between these weapons and I’m starting to hear voices. Haven’t slept in weeks.”

Redditors quickly traced this and similar notes back to McLarey, who appears to be on the cusp of a psychotic break due to the rigorous update schedule.

“I was sure it was Ed once I saw the note about hoping that Jack and Liza, Ed’s kids, remember their father’s face,” explained /u/JoeNeatesRedShirt, “but once he embedded that apology letter to his wife Anne in the description of the particle quality slider, I knew it was him.”

According to McLarey’s employers, the cry for help embedded in the patch notes are not indicative of the culture in their office.

“We want to make it absolutely clear that just because Ed seems to be going through a rough patch does not mean that we are mistreating our employees,” explained Rare co-founder Tim Stamper. “All of our programmers are happy and healthy. It’s company policy for them to be and we fire them if they’re not.”

At press time, those close to McLarey confirmed that he accidentally mumbled a list of updates planned for Sea of Thieves to his therapist instead of discussing his newfound depression.