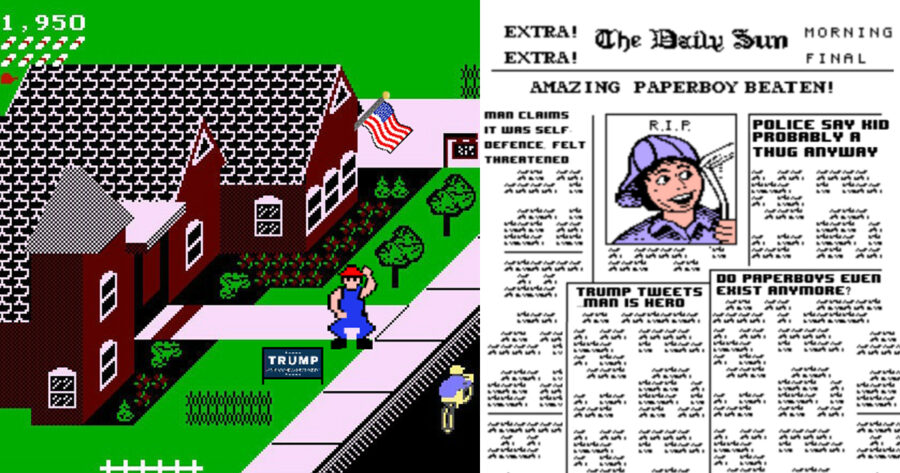 ANYTOWN, U.S. — Johnny Johnson, local paperboy, has been hospitalized after being severely beaten by local resident Grady Hollis for delivering “fake news” to Hollis’ home on Medium Road. Johnson had been a paperboy for The Daily Sun for approximately three days before the incident.

“Mr. Hollis felt threatened by the boy forcing a liberal propaganda rag into his mailbox, and on one occasion, through his window,” said David Barnaby, Mr. Hollis’ attorney. “He was simply defending himself and his family as any American would and has the right to.”

Hollis had reportedly canceled his subscription to the newspaper via an angry letter earlier in the week, but Johnson was never notified of the cancellation. When he went to deliver the unwanted paper, the trouble began.

“All of a sudden I just saw this dude in a red hat tear out of his house,” said witness Trent Furey. “He shoved that kid off of his bike and just started wailing on him. I couldn’t really make it out but he was screaming stuff like ‘fake news’, ‘CNN’, ‘cuck’, and ‘sad’. Then he made the kid eat one of the papers.  I’d of done something [sic] but I was recording it all on my cell phone.”

Prior to the beating, Johnson had endured dog bites, been hit by cars, and was even chased by a mummy in the line of duty. Nevertheless, he persisted, displaying what many at the Sun have described as an inspiring work ethic. The police, however, have painted a different picture of the boy.

“The kid is a thug and we are treating his actions as a hate crime,” Sgt. Fred Daniels said. “He terrorized this poor family and finally got what he deserved. We also have reason to believe that he was carrying an entire arsenal of deadly firearms.”

The arsenal in question turned out to be a canvas sack full of newspapers, the same kind Johnson used to successfully foil an armed robbery attempt earlier in the week.

Hollis has not been taken into custody nor changed with assault. Witnesses say the boy was beaten so badly that the looming spectre of death literally arrived on the scene to escort his soul to the other side.