Novelty Zelda Wallet Only Holds a Maximum of $99 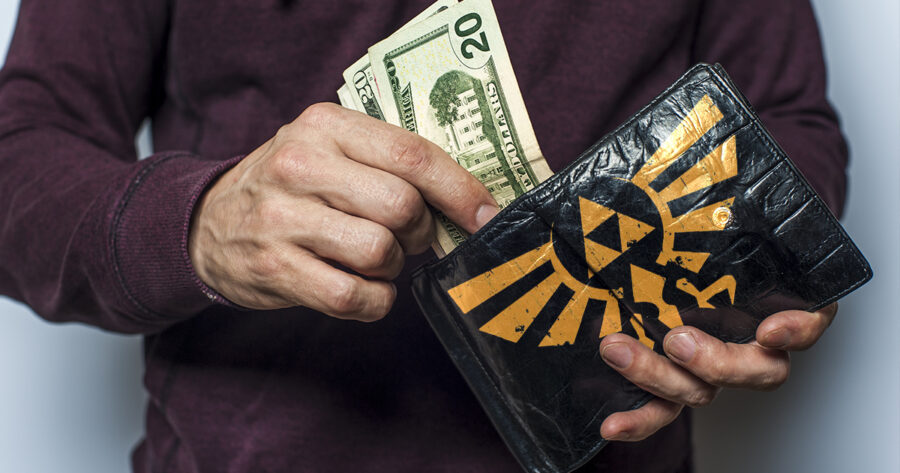 NEW YORK — Upon returning from a shopping trip to the Rockefeller Center Nintendo shop, gaming enthusiast Amy Weiss was dismayed to discover that her new novelty The Legend of Zelda wallet only holds a maximum of 99 dollars.

“I felt like somebody had pulled some kind of magic trick on me,” Weiss said, recalling the events with a flustered look on her face. “I transferred all of my cash from my old wallet into the new one, something like $160 bucks in $20’s, but when I went to pay my cab driver later that night all I found was 99 dollar bills! I don’t know how to feel about it. On one hand I’m continuously impressed by the detail and quality of Nintendo products, but on the other hand, what the fuck Nintendo? Where’s my other $61?”

According to those familiar with the situation, Weiss was unable to figure out how the wallet functions.

“How does it work, and why? It is a mystery,” said Weiss’ roommate Kristen Birch stoically while inspecting the wallet. “Nintendo somehow manages to be a decade behind in online play and console power, but at the same time they have access to this technology, whatever it is. Is it sorcery? Witchcraft? The power of the Triforce itself? Fuck if I know, but we keep putting money inside of it to test it out and now we’re down about two hundred dollars from trying to figure it out.”

“I reached out to Nintendo,” Weiss continued, “and they suggested purchasing a larger wallet. It holds more money but it’s the same size. What?!”

At press time, Nintendo apologized to customers who purchased the wallet and offered to send fans a free prototype of their new tunic that fits multiple arrows, bombs, weapons, masks, and a boomerang, without changing appearance.